One has no right to get angry  with even  an able- bodied Beggar.
There was a person who was disposed to be generous.


He would not turn away anyone empty - handed. But he had the fault that he used to become uncontrollably an­gry on seeing an able-bodied beggar. He asked ShriMaharaj what could be done about it. ShriMaharaj said, "That an able-bodied person seeks alms is not the reason for your reactions getting out of control. What you are angry about is that you feel that he ought to earn his livelihood by working, and he is not doing so. If you realize that this dereliction of duty is also committed by yourself, the feeling of anger will immediately subside. As one has got the human form by the grace of God, one's true duty is to attain Rama by practisingNamasmarana. One does not do it at all. So what a great dereliction of duty it is on one's part ! If God were to look at us from this point of view, how angry ought He to get ? But He does not. So one does not get the right to be angry with the beggar. Besides, it is not as if all the money you earn is the result of your own efforts. So, when someone seeks alms, you should not deny but give him something, with a sentiment that God has given you an opportunity to give in charity. One certainly ought not to speak badly to him. One should give only so much as one would not care to remember. Giving away forms a habit. It results in one's totally giving oneself up to God."
Posted by Raghunath at 7:11 AM No comments: 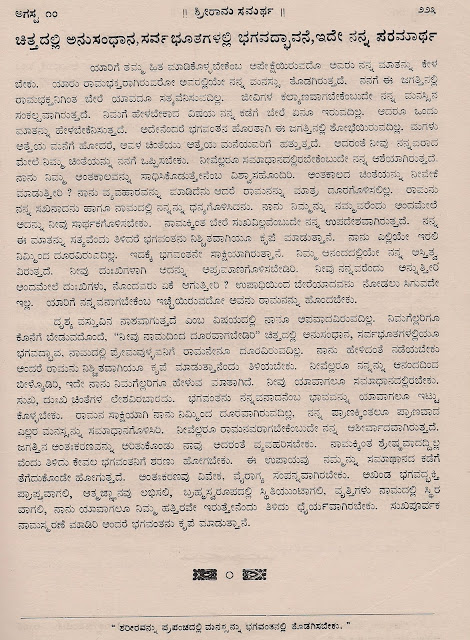 Posted by Raghunath at 7:05 AM No comments: