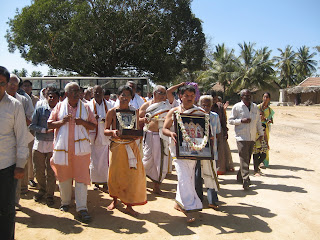 Malligere is a remote village in Karnataka, about 35 kms from Chikkanayakana halli, a town in Tumkur District. It is here that Sri Maharaj first gave Darshan to Shri G. Venkannaiah on a tank embankment and asked him to ".come to Gondavale'. and vanished. This sacred moment, in that place, caused  Shri G.Venkannaih to go to Gondavale and got initiated to 'Ram-nam', and later on to construct a Shri Ram Mandir in Chintamani.(The details of his darshan with Shri Brahmachaithanya Maharaj has been published in this blog elsewhere, as per his own article published in Golden Jubilee souvenir of Gondavale Samsthan)
Some of the Villagers have marked the place where Shri Maharaj stood while giving darshan to Venkannaiah, and have erected a sthoopa (a small pillar) and have installed  paduka.in stone.
A large number of devotees visited this place on Sunday (30-1-2011). Devotees from Chnthamani, Bangalore, Tumkur, Tiptur and Arasikere had assembled there for the pooja arranged by Shri Jaya Prakash, (nephew of late shri venkata rao,retd.railway station master). He had also brought the Danda and Paduka of Shri Maharaj, which the family have in their house. Maha Prasad was served to all the devotees.
A few pictures.............. 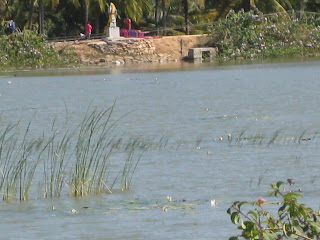 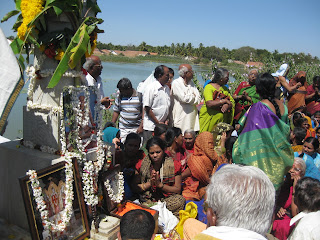 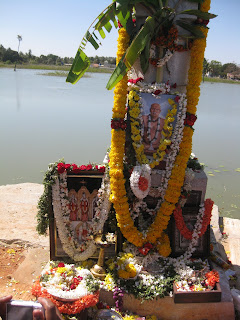 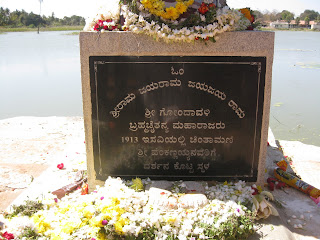 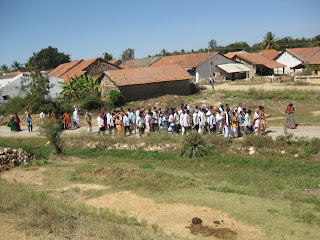 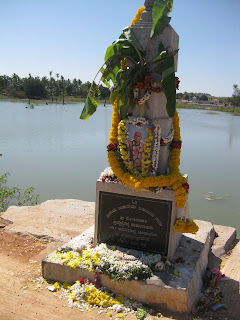 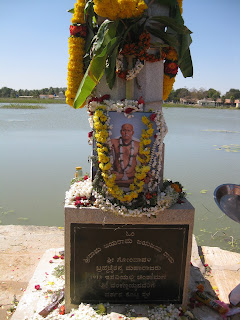