The 62nd anniversary of the Sri Brahmachaithanya Sri Rama Mandir will be celebrated from 11-6-11 to 13-6-11. Many devotees from Maharashtra and all over Karnataka are expected to attend the function. On this occasion, it is fitting to remember a person, who has served the cause of the Mandir from its inception and worked for its development, till his end. 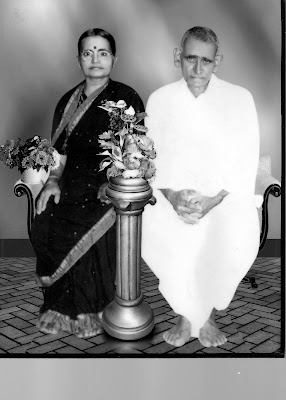 Sri  G. Honnappa(1908-1978) is the Youngest brother
of Sri G. Venkannaiah.  Sri . Venkannaiah
lost his wife in quite a young age, with two daughters, and did not re-marry. He
stayed with his brother’s family. Sri Honnappa treated his elder brother as a
son to a father, and co-operated him in all his spiritual activities. His house
was open to all the devotees coming from different places, and the
japaanushtaan and Bhajans were carried on in his house, prior to the
construction of the Mandir. His wife Smt. Nanjamma was very devoted and looked after the interest of the Mandir.
Mandir was started in 1939, at the present site of the Mandir, with  photos of Sri Ram, Shri Maharaj and Shri Maharaja’s Padukas.
The idols of Sri Maharaj, with Sri Ram, Sri Lakshman, Sri Sita Devi, and Shri Hanuman were ordered to be prepared in Jaipur, by Sri G.Venkannaiah. When the idols were ready, Sri Honnappa went to Jaipur with his brother-in-law Sri H.N.Subba Rao,and brought the divine idols to Chintamani, which were installed on 13th June 1949 in the divine presence of Poojya Sri Tatya Saheb Ketkar Maharaj and Poojya Sri Kundagol Narayanappa Maharaj.
With a view to the maintenance of the Mandir, Sri G.Honnappa constructed two houses, on a
personal loan, in the site behind the Mandir, and the houses were donated to
the Mandir, after clearing the loan through the rent collected from those
houses..
With a view for a source of income for the Mandir, He sold the ancestral agricultural lands they had, and constructed a Kalyana mantap opposite the Mandir. The rent collected through the Kalyana Mantap is used for the expenses of the Mandir. This is also utilized during the Mandir functions for cooking, dining and housing the devotees from other places.

As the Mandir’s aim was also,
annadaan, as per the desire of his brother Sri G.Venkannaiah, he started a
poor  students hostel in 1966. with a
capacity of about 25 students. Initially, the hostel was housed in the 1st
floor of the Kalyana Mantapam. Later on, a building was constructed in a corner
behind the Mandir, with rooms, kitchen and a dining hall for the hostel. Since
then, the hostel is still running. Many students who studied in the hostel have
become devotees of the Mandir and participate and cooperate in all the activities of the Mandir.

When Sri G. Venkannaiah was bed–ridden, Sri Honnappa started to take keener interest in the affairs of the
Mandir, and after the death of Sri G. Venkannaiah in the year 1969, he devoted
his entire time towards the Mandir.
Hither to, the Mandir
properties were in the individual’s name. Sri Honnappa made a trust and
transferred the properties to the trust.
Hither to, the Mandir had no
Gopuram on the Garbha Gudi. He got it erected and a grand function was arranged
to commemorate it.
Silver Jubilee celebration of
the Mandir was celebrated in the year 1974 with many devotees participating in
the function.. He left his mortal coil on 22-6-1978. Jyeshta bahula triteeya, the day on which the divine idols were installed in 1949.
A few words about Smt. Nanjamma: She participated in Bhajans and Shejarathi from the day the Mandir was started, besides doing Bhajans at home. She used to supervise in the kitchen of the Mandir, during the time of functions when large number of people were fed.She used to sit for Japnushtan in Sukanasi (the room in between Mandir Hall and Garbhagudi). And after the demise of Sri Honnappa, she used to sit there most of the time.and kept watch for the smooth running of the Poojas and Arathi. A few of her Bhajans are still being sung daily in the Mandir.
She was doing the service of the Mandir, with Ram-naam on her lips till her end in 1991.

Posted by Raghunath at 11:55 PM No comments: