Whatever is perceptible to the senses perishes sooner or later. It can never be independent; it is always subject to control by God, and so we should understand that everything that happens is purely by divine dispensation. Our body is also perceptible, and is animated by God; we should therefore maintain constant awareness of Him. It is, by nama-smarana that this can be achieved. So you should resolve to live in nama. If the mind devotes itself to nama, one finds no difficulty in leaving the body to the vicissitudes that prarabdha may bring, without being affected by either pleasure or pain. Even saints cannot escape prarabdha, but they face it with equanimity because they have freed themselves from the 'body-am-I' feeling.
Go about your worldly business, but never lose sight of nama. Whatever may come as the result of your effort should be accepted cheerfully as divine dispensation. We are men of the world, after all, so we should never spare putting in appropriate effort, but never be carried away by it and forsake nama. Righteous behaviour is a sine qua non for spiritual uplift.
Do not follow any Tom, Dick, or Harry, or any person who may be a hypocrite, nor stray from the righteous path. Trust only in a genuine saint, keep nama ever on the lips, and go through prapancha with due regard to righteousness. I assure you that one who conducts himself thus will be blessed by Rama.
It is a pity that most people profess devotion with an eye on some mundane objective. Few, indeed, want God for His own sake.
Who is a good doctor? One who cures a sickness which has been given up by others as incurable. Similarly, a genuine saint is one who rescues persons who are steeped in passion. To such a saint one has only to go in utter surrender.
Prapancha today is about the same as it was in bygone times; the most significant difference, however, is that most people then were devout and god-fearing, whereas today they are less broad-minded, more self-centred, less helpful to each other, less self-sacrificing.
Resolve to do what I ask you to do, no more, no less, and say 'good-bye' to all worry in life, for I undertake all responsibility for you. 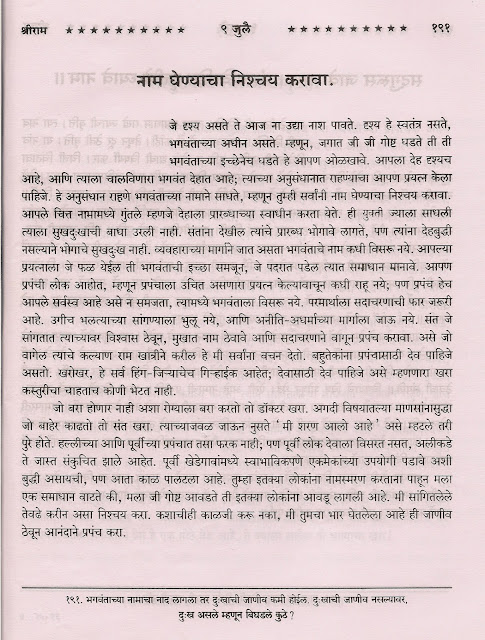 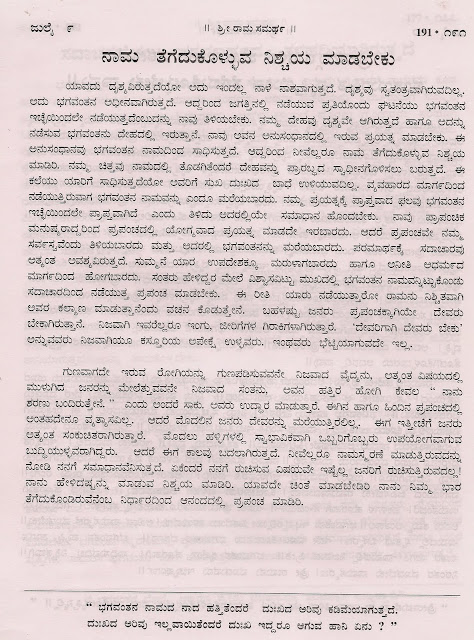