Pleasure and Pain Depend on Awareness of God
Nowadays everyone seems anxious to achieve somebody else's interest, but what can be expected from one who never attends to his own? This situation is caused primarily by pride; everyone is bloated with the idea of doing something for the good of others. This pride can be eradicated only by doing the sadhana prescribed by the sadguru. It is therefore necessary implicitly to obey him.
Brahma, the Ultimate Reality, does not have to be looked for anywhere, because it is in the heart, everywhere; however, it is only realized through the medium of the sadguru. Lord Shrikrishna was an incarnation of Parabrahma, the Ultimate Reality, in human form, as the son of Vasudeva; but Vasudeva only loved Him as his son. He never realized His true form until the sage Narada made him aware of it. Rama was, similarly, an incarnation, but only became aware of His true identity when informed by the sage Vasishtha. Evidently, the 'ignorance' in either case was a feigned one, in order that the principle, that a sadguru is a necessity, may be impressed on human beings in general. The sadguru advises, in essence, that nama-smarana is the true, the simplest, sadhana.
Nama-smarana is apparently simple, but, in fact, difficult to practise wholeheartedly; however, we should persist in it. We should go in complete surrender to God, and, take my word for it, He crowns our effort with success at a suitable time.
Really speaking, nothing is good or bad in this world but thinking makes it so. The effect is temporary. They arise from our imperfection, incompleteness, of understanding. Real pleasure and pain arise from proximity to and forgetting of God respectively. We should have a conviction that we belong to God, and accept all happenings as coming at His will.
We celebrate as a festive occasion the birthdays of Shrirama or Shrikrishna, every year. That means, in effect, that we have in the meanwhile put back on the shelf of memory the awareness that God is here, everywhere, all the time, and the awareness needs to be renewed! God was here in the past, He will be here in the future too though we shall cease one day to exist in the human form.
* * * * *
Posted by Raghunath at 6:02 AM No comments: 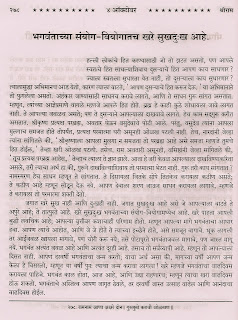 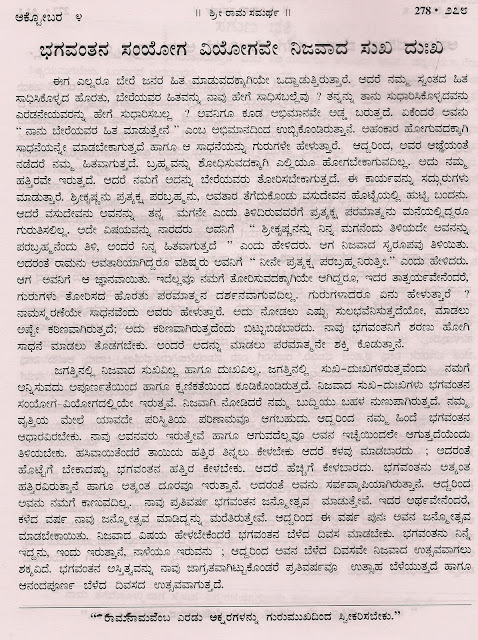