Genuine Yearning and Utter Surrender
God is not attained merely by eschewing carnal pleasures, not by abandoning the family, not by resorting to a forest, nor by living amongst people. Truly speaking, God is not attainable by any particular physical act or procedure. We find saints who live as ordinary householders; there are others who live as recluses.
The chief requirement is genuine yearning; such yearning is fifty per cent of the battle; it is the foundation for the edifice to follow. With this, the next part of the task becomes easier. If the yearning is there, it is not essential that sensual pleasures be discarded. One must genuinely feel that he belongs to Rama, and surrender oneself utterly to Him; that is, in the heart of hearts, genuinely and wholly live for Him. Do you think this will interfere with your prapancha?
In service, does one always find a kind and considerate superior? Do we not serve him, without demur, physically, though at heart we may not like him? So, we should determine mentally to belong to Rama, though physically we may toil, willy-nilly, for prapancha; it will turn out even better than otherwise expected, because Rama Himself, in Whose name we do it, feels it incumbent to ensure that it does not bring Him discredit. Bibheeshana approached Rama in a truly humble spirit. Coming as he did from the enemy's camp, and being the very brother of the opponent, he was naturally a suspect, and Rama's counsellors all advised putting him to death. But Rama put forward the decisive argument: ''He has come in complete surrender, and it is therefore my duty to protect him.'' And He not only spared his life, but, further, gave him the kingdom of Lanka. That is why I say that Rama protects those who approach Him in sincere surrender.
You are so many coming to me, but has a single one of you asked me to take you to Rama? Am I here to provide you with mundane favours? Is not your approach similar to that of a thief who goes to visit Maruti in the temple and vows to crown it with a gold pinnacle if he has a good 'scoop' that night? What you should pray for is, 'God, give me complete contentment in whatever condition you choose to keep me in; let me wish to ask for nothing.' 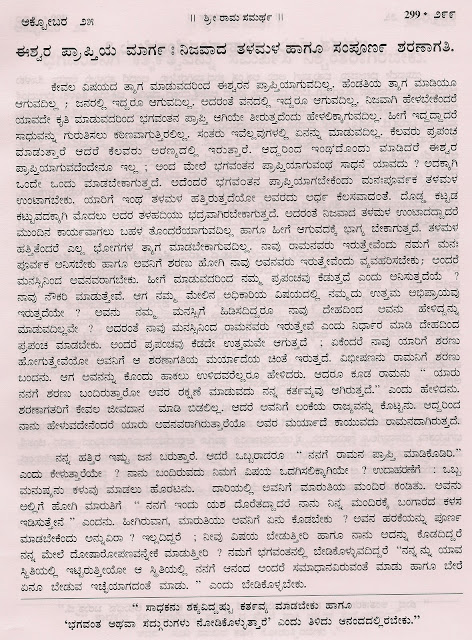