'Ajapajapa' : Constant Involuntary Nama-smarana
There was once a well-behaved, well-meaning man who had no addiction whatsoever. He took keen interest in astrology. Once there came to his place a bairagee who soon became widely known for his accurate fortune-telling. So he went to see the bairagee. He found him reeking with the hemp which he was in the habit of smoking. Unaccustomed to the foul smell, our gentleman sat in a far corner and listened. Drawn by the deep knowledge and accurate foretelling of the bairagee, he drew closer and closer to the bairagee and soon got into deep friendship with him, and, one day even filled hemp into his pipe. Later, importuned by the bairagee, he started smoking hemp himself, and soon the disciple became a hard smoker and surpassed the master. All the result of company! A saint is one whose company creates love for God. It is needless to say that one should yearn for such noble company.
Maruti won over Shreerama by ceaselessly repeating nama. You do likewise, and you will similarly propitiate Shreerama. The repetition of nama will certainly reach Him if you have firm faith, no matter where, when, or how you say it. Pranayama, yogasanas, etc. are other means of attaining to the Lord, but far more important is devotion which becomes ingrained. The involuntary, innate recitation of nama is called ajapjapa; it is the highest form of devotion, involving as it does the complete annihilation of ego. This is true unification with God, the goal of paramartha. We should understand that our true self is identical with the Cosmic Soul. This understanding will come when we turn our thoughts inward.
Anxiety is the disturbance which invades the mind when it loses awareness of God. All sorrows and ailments are subjugated by irresistible joyousness and contentment, and this joyfulness and contentedness come by clean conduct and ceaseless reciting of nama. Contentment is the peace of mind which comes of firm faith in God. Nama is the link which joins the mind to God. If we treat nama as our all-in-all, we can easily attain to Him. The exhilaration of nama-smarana will make a man forget himself as well as the whole world. I am incessantly trying to create in everyone a strong liking for nama.
* * * * *
Posted by Raghunath at 6:02 AM No comments: 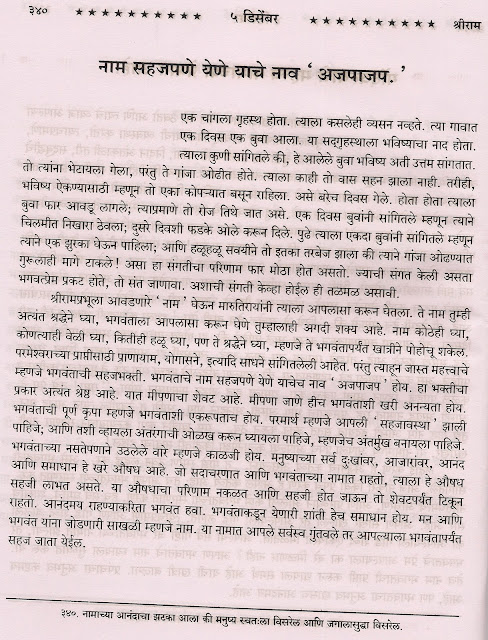 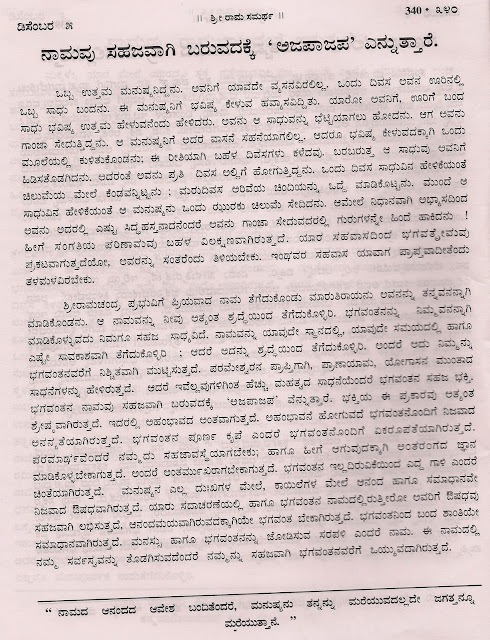