The Subtle Nature of Nama

"Were it possible to attain Rama by merely repeating His nama, it should similarly be possible to obtain employment by just sitting in a room and repeatedly saying, 'Job, Job'." This is how a 'conscientious objector' to repeating nama as a spiritual exercise often argues. Such argument, however, is defective in logic, because the analogy is fallacious, in as much as the two things compared are basically dissimilar in their characteristics. Chanting nama is a physical action aiming at forgetting the 'body-is-me' feeling, and merging into God; that is, going from the gross to the subtle. In the case of obtaining employment, on the other hand, we begin with the idea, that is, an abstract thing, whereas the end product aimed at is gross, namely physical employment, emoluments, etc. It involves various processes like applying to one or more employers, going through tests and interviews, receiving a letter of appointment, and then performance of the actual duties assigned. This is altogether a process exactly reverse compared to the chanting nama. As another instance, take the case of building a house. We begin with the idea, and the process involves preparation of sketch plans, arriving at the final plan after taking into account comfort, convenience, economy, the availability of labour and materials, actually procuring them, and physical construction, finishing, furnishing, etc. All these involve the use of things, persons, and processes for turning an abstract idea into a concrete entity. In both these cases, we start with the thought, and need a lot of paraphernalia and dependence on others.
As against this, it is not only easier but actually sure to attain merger with Rama by repeating nama. Here we go from the gross to the fine, from the material to the subtle. Devoting the mind to nama to the exclusion of material things and related thoughts is thus a much easier thing to do and achieve. So take to repeating nama, without raising hypothetical or imaginary doubts and queries.
All the various ills that torment the human mind spring from the ‘body-am-I’ concept. The only way to rid the mind of that concept is to repeat nama with loving faith. This will purge the mind of all turpitude and purify it, provided we have the necessary ardency. Forget your small, circumscribed, separate individuality, and merge into the Universal Spirit.
* * * * *
Posted by Raghunath at 6:02 AM No comments: 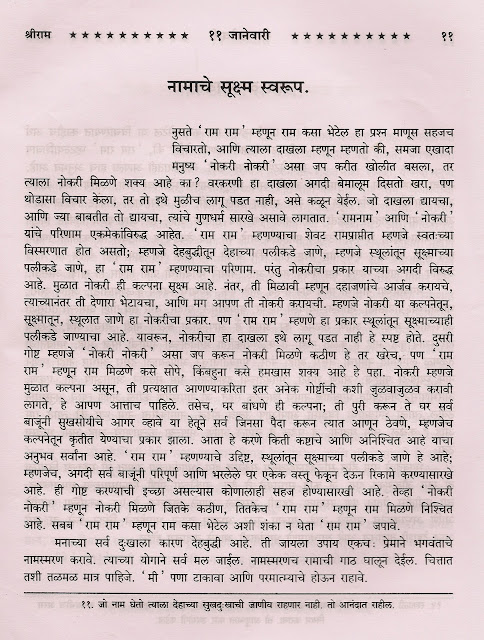 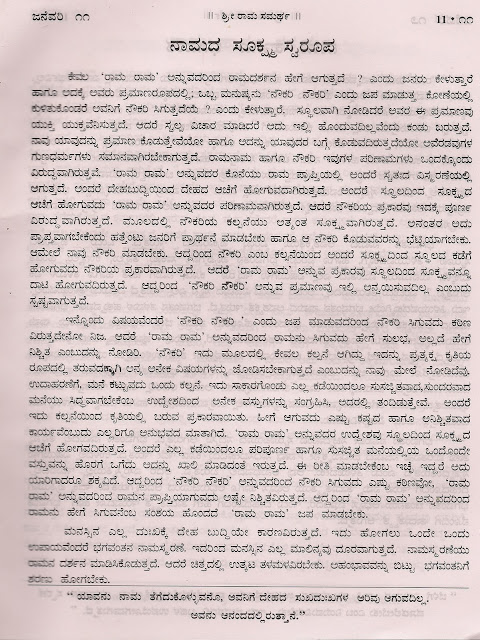