Nama is 'Sat-Chit-Anand' itself. Nothing is closer to the Supreme Soul than nama. It is the parent source of energy, as also of all bliss. In its ebullience, it gives rise to all creation. It generates numberless forms, destroys them, recreates them; all the while it maintains its own eternality; is this not a supreme marvel? Ever since I learnt to speak, I have been incessantly talking about it, and yet have not said enough about its greatness, its supremacy. He alone will conceive its greatness whose identity has completely merged in nama. Such a person will either maintain complete silence on the subject, or will go on talking about it to his last breath; for, the greatness of nama can never be told completely or adequately, nor will the listener be ever satiated.
Nama wipes out all sin. To forget the Lord is the greatest of sins; nama keeps us ever awake to the Lord. It is superior even to the vedas. In order to benefit from them, we must first study all the four vedas, which will involve a vast amount of time and labour; nama needs no effort. Besides, not all people are eligible and qualified for such study, whereas nama can be chanted by all and sundry. All vedic mantras commence with Om, that is, with nama. It is superior to pilgrimages to sacred places; such visits aim at purifying the heart, but they require adequate money and means as well as physical well-being. Nama, on the other hand, brings about such transformation right where we may be. One should go to Pandharpur, for instance, to learn to chant nama, else the pilgrimage is in vain. Nama is the prince of all righteous actions, sat-karmas, for sat is God; and therefore that alone is sat-karma which leads to Him. Other actions that can lead to Him follow tortuous roads, while nama takes us straight to Him. Nama is a sovereign cure for bhava-roga, the disease of worldliness. To be addicted to worldliness is at the root of that disease. Nama directs our love to God, detaching it from its present object, worldliness. Nama relieves us from all pain and misery, for they rise from love for sensuousness, which nama destroys. Besides, because God is bliss incarnate, when we hold fast to Him with nama, how can misery even exist for us? 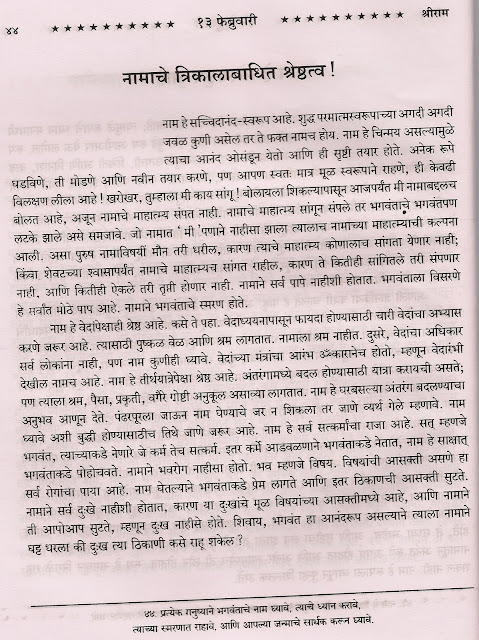 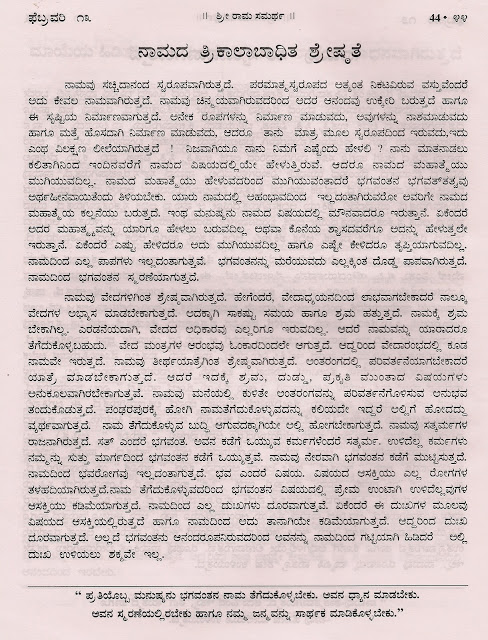