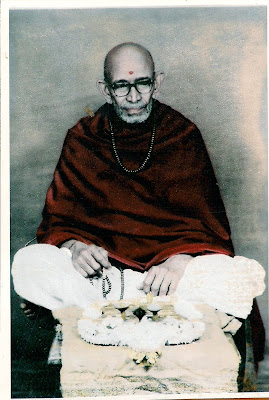 Sri G. Venkannaiah's Jayanthi
Poojya Sri G. Venkannaiah (1883-1969), had a vision of Sri Brahmachaithanya Maharaj who called him to Gondavale. Venkannaiah who had neither seen nor heard of Sri Brahmachaithanya Maharaj or Gondavale, wondered how to reach him. However, it was Maharaj's Grace which made him meet a Yogi, Sri Rangachar, who after a yogic meditation, found out that the saint Sri Venkannaiah met in his vision, was Sri Brahmachaithanya Maharaj of Gondavale.He also told him how to reach it.The two devotees went to Gondavale with in a week.Sri Maharaj had told his desciples there that he was expecting two devotees from a far off place, and he cancelled his scheduled visit to some place on that day to receive the two . Sri G.Venkannaiah, was very happy to meet Sri Maharaj. Next morning he was initiated by Sri Maharaj to Taraka Nama and asked him to do the following:
1) Do namasmarana without break.2) Spread or Propogate Rama-nama.3) Construct a small Mandir (Of Sri Rama) 4) Carry on Upasana.
One month after they returned to Chikkanaayakana halli, Sri G.Venkannaiah received the sad news that Sri Maharaj has left his mortal coil. He went to Gondavale and attended the ceremonies.
As per the order of Sri Maharaj, Sri Venkannaiah was doing Namasmarana and Japanushan, propagating Rama-Nam as much as he could. But as he was in a Government Job, and was transferred to different places, he could not construct the Rama Mandir, earlier. Finally, when he was transferred to Chintamani, he bought a site for the Mandir, and the foundation stone was laid by Sri Kundagol Narayanappa Maharaj, in the year 1939. The marble idols of Sri Brahmachaithanya Maharaj, Sri Ram, Lakshman,Sita Devi and Hanuman, were installed in the Holy presence of Tatya Saheb Ketkar Maharaj, and Kundagol Naryanappa Maharaj on 13th June 1949.
Sri Venkannaiah was a source of inspiration for many devotees. His Jayanthi was celebrated with Japanusthan and a lecture by Sri B. Sree Rama Murthy, and Maha Prasadam.
Posted by Raghunath at 9:27 PM No comments: