Implicit Observance of the Guru's Dictates


Once it so happened that a boy was removed from his mother immediately on birth, and reared elsewhere. When the two chanced to meet after several years, they could not even recognize each other. We humans are in a similar situation. We are in utter ignorance about the purpose of our life, which, in reality, is to realize God, of whom we are part and parcel. What has happened is that we are so thoroughly given to the senses and their pleasures, that we never stop to think of anything else. The senses and the objects to which we look for pleasures are themselves transitory, and therefore incapable of yielding real, permanent pleasure. Consequently, devotion to God, who is eternal, is impossible unless and until we cultivate complete detachment from these transitory, unreal pleasures.
What is it that a guru does? He leads us to the conviction that sense-pleasures are transitory, that is, impermanent, and unreal. Consequently, it is in our interest to obey him implicitly. Whatever spiritual exercise you undertake, if it has not been prescribed by him, will only be so much futile trouble; it will not be of avail. The reason is simple; it means that we consider that the guru has prescribed something inadequate for us; that is, in other words, the guru's dictates, that is, his knowledge and judgement, fall short of perfection. We should never swerve from the conviction that the guru is omniscient, nothing short of God Himself; for it is this conviction that is the foundation of firm faith. The essence of what the guru tells is that nama is the palpable manifestation of the one Ultimate Reality, that is, God; and that nama-smarana is so perfect as a spiritual exercise that it does not need anything to supplement it. It is a hundred-per-cent truth that nama is the most perfect sadhana as well as the ultimate goal.
We should be as intently loyal to the sadhana prescribed by the sadguru as a chaste, devoted wife is to her husband. A person who does his sadhana with such loyalty, can alone be said to be devoted to it, and he invariably comes by unalloyed bliss.
If only we approach God with the yearning and expectation that we apply to mundane objectives, we will not fail to realize true bliss. 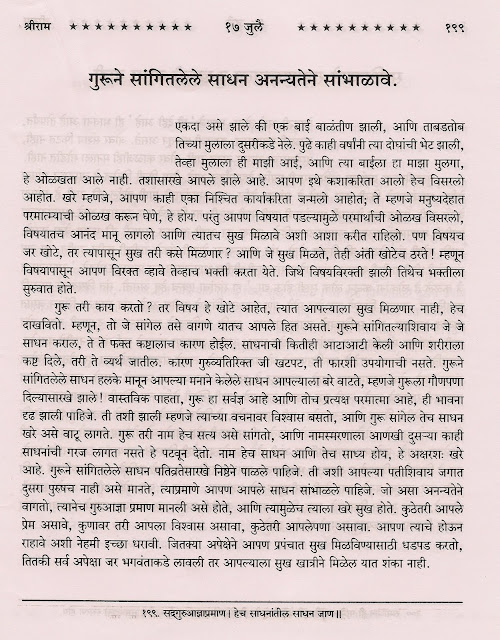 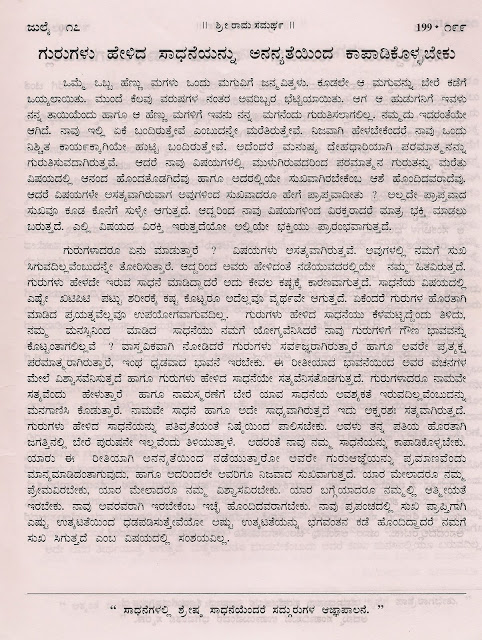