Nama is the Sovereign Remedy

You say that you repeatedly make mistakes. They seem amusing to me, like a child's toddle or baby-talk to its parent. Equally amusing are your attempts of correction. So you need not feel embarrassed in the least. If the guru says that you are condoned and absolved from your past deeds, the disciple should accept it in faith. Nama is the only remedy that purifies a man of his errors. Indeed, it is the sovereign cure for all ills; only, it must percolate steadily, constantly, by drops as it were. It should also be taken to your workplace. It does good to all, the learned and the ignorant, the rich and the poor. It will show a quick result if taken with the proper regimen.
If a boy insists on jumping into a well, should the father indulge this stupid obstinacy, or bring him to reason with a slap in the face, and lead him away by force? Similar is your solicitation for mundane things. The true devotee is never in pain, sorrow, or dejection; he is ever contented, no matter what pangs of poverty, difficulty, or bodily illness he may be in. We commonly feel sorry if we fail to get what we want. A true devotee, on the other hand, harbours no desire whatsoever, and so has no cause for sorrow at any time. Indeed, being merged into the Supreme Being, his desire does not differ from that of God. Worshipping saguna, he gradually forgets his individual self and becomes increasingly confirmed in feeling that he has no separate existence from God. When, finally, his individual soul dissolves into the Cosmic Soul, the intermediary Rama, Krishna, etc. also vanish, and the sole thing that remains is the Cosmic Soul.
A person recuperating from exhaustion following a prolonged illness needs the support of a walking stick; likewise, a common house-holder should resort to saguna bhakti. Indeed, nothing else is possible so long as there remains even a vestige of awareness of the body. We should pray to God for His grace, which consists in His unbroken remembrance. This will eventually result in bhakti. There is no happiness, no contentment, except in belonging to God. One who so belongs to Him, that is, remains in constant remembrance of nama, will never be tired of life. 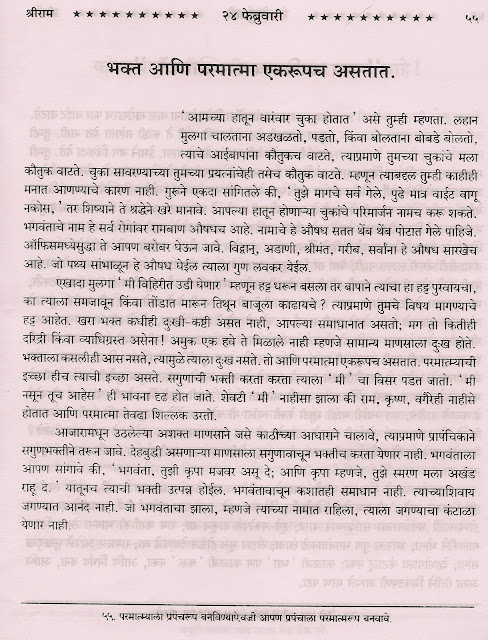 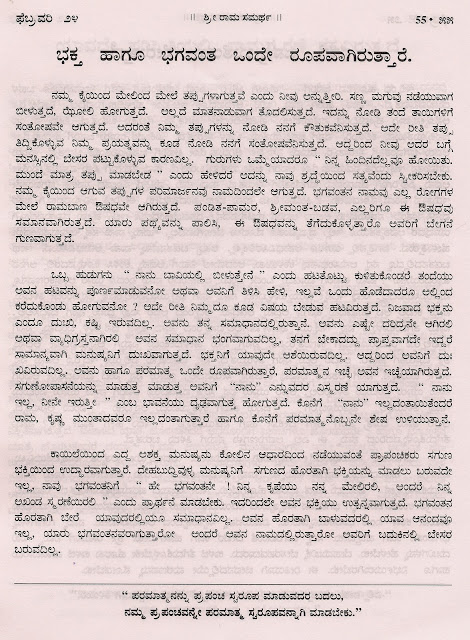