The spirit of a saint is particularly active, beneficent, on the day of his anniversary. The devout vow you make on such a day receives his special grace and support. Determine on the anniversary to live in the divine name.
I wish to be ever in the company of everyone who comes here to me, but you virtually shut me out of your heart by living in mundane interests. Keep uttering nama assiduously, persistently, to keep mundane interests away. Bad times loom ahead threateningly; you will ward off their evil influence if you keep faith in nama. If anyone, no matter how great or learned he is, tells you anything against nama, believe him not, and never leave off chanting nama. Just as a thing tied firmly to a deeply-anchored post will resist being washed away by a torrent, if you hold firmly on to nama, you will successfully resist the onslaught of the bad times.
As Shree Samartha says, the form is identical, co- existent, with nama; so you will undoubtedly perceive the form if you persist in nama. We have to realize the Lord in our own heart; it is in our own interest that we gradually realize Him there through persistent nama-smarana. Only thereby shall we perceive Him truly and permanently. There are those who show or perform miracles; one may see some divine aura, or a vision; even if true, such experiences are only occasional and short-lived. If a lanky person, desiring to look normally fat, prays for swelling over the body, it would be evidently foolish. If, on the other hand, he takes proper medicine, he may not look fat but will at least become tough. The 'spiritual experiences,' visions, and similar things may not be permanent. So, on a saint's anniversary, we should pray for his blessings and help in sterling spiritual progress, not for temporary or elusive 'experiences'. Constant nama-smarana will definitely give love for God.
Religious festivals, holy days, saint's anniversaries --- all remind us of our spiritual duty in the midst of the multifarious claims of prapancha. To do nama-smarana in all these various distractions does need a resolute heart. Nama is backed by God Himself, and includes company of the good. So resolve right now to chant nama continuously without expectation of reward. 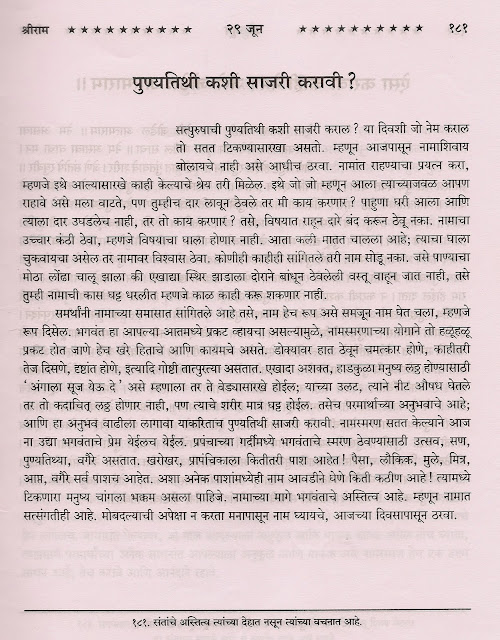 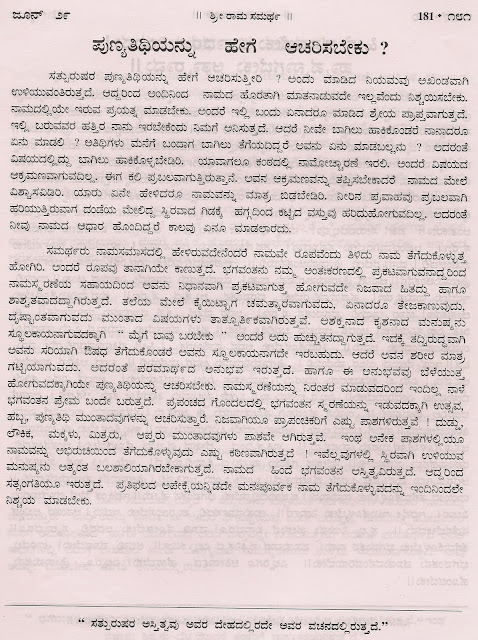