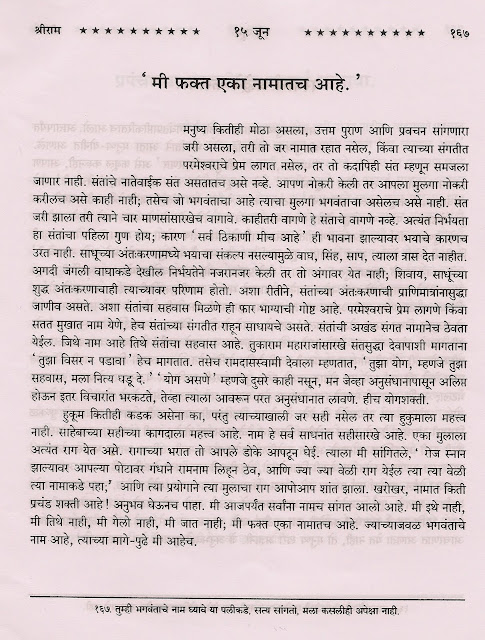 Posted by Raghunath at 6:08 AM No comments:

'I Live in and for Nama alone'


A person may be a great scholar, able to deliver excellent sermons and profound discourses on the shastras, talk lucidly on the scriptures and mythology; he may be a good man, even a godly man, and yet he may not be acknowledged a saint if he does not live immersed in nama, or if one is unable to learn to love God in his company. Relatives of saints are not necessarily saints, just as a son may not take up his father's calling.
Even a saint should outwardly behave like a common man. To behave eccentrically is by no means the distinguishing feature of a saint. Complete freedom from fear is the prime quality of a saint. What, indeed, can create fear in one who sees God everywhere and in everything? Being without a trace of fear, he is left undisturbed even by normally lethal creatures such as snakes, wolves, tigers, and lions. Even wild man-eating animals will not dare to meet a fearless gaze; besides, the purity of the saint's heart also has a disarming effect.
Association with a saint only comes from extraordinary good fortune. Generation of love for God or for His name is the true gain to be derived from such association. Unbroken association with a saint can only be obtained by ceaseless nama-smarana, for where there is nama, it is there that a saint likes to dwell. Shri Tukarama's prayer is: 'Grant, O Lord, that I may never forget You;' while Shri Ramadas prays for the favour that he may never have to live away from Him, to be ever associated with, attached to Him, and for the mind to be restored to awareness of Him whenever it happens to stray away from Him.
An order, however emphatically worded, remains ineffective unless signed by a competent authority; the signature imparts life to it. Nama plays the role of that signature with respect to any spiritual sadhana. The strength and vitality of nama have to be tried and experienced to be believed. It is nama and nama alone that I have been advocating all my life. Indeed, I came and lived for nama, I live in nama, I exist neither here nor there but only in nama. Whoever utters nama, there, about him I live and linger. That you should keep uttering nama is all that I exhort you to do, all that I expect from You. 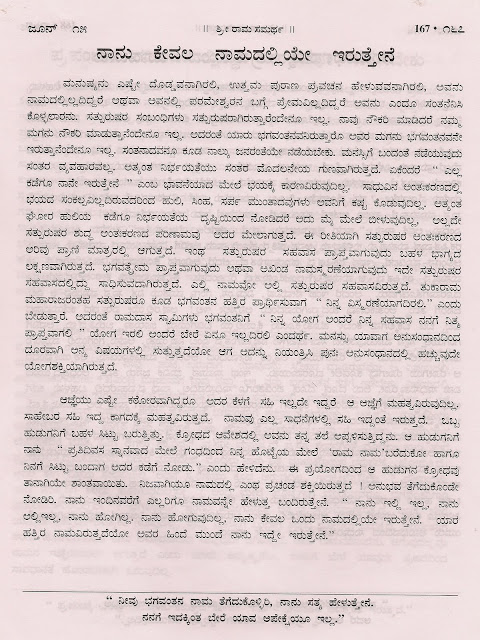