How did one behave at that Age? 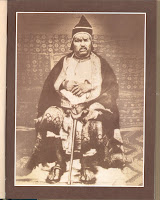 Once a well-educated pensioner, advanced in age, met Shri Maharaj. He complained that his grown-up son did not obey him at all. His contention was that as he had looked after him in the early years, bearing many hardships, he should not now cause him any sorrow. Shri Maharaj said, "I do not feel he deserved much blame!"
The man clarified his complaint by citing a couple of specific examples. Even then  Shri Maharaj repeated himself. Then he said to Shri Maharaj, " I do not understand the meaning underlying what you are saying." Shri Maharaj said, " One should realize one's shortcomings. What I mean is, recall how you behaved with your own father when you were of the same age as your son is now. If you were to recall that you did not behave in a manner in which you expect him to behave now, your feeling of disappointment in your son will lose its edge."  (The gentleman had not behaved well with his father in his own young age)
Posted by Raghunath at 10:33 PM No comments: