Prapancha is the Ladder for Attaining Paramartha


Working many years in a subordinate position develops a slavish attitude of mind; this is undesirable. A person should live at least for some years as his own master. Even during his period of service or business, one should learn to live in consciousness of God so that, on retirement, he is able to occupy his spare time in such consciousness.
Everyone is in search of joy and contentment, all through life, and strives continuously for it; that is, everyone is after paramartha. Prapancha should be treated as instrumental for that purpose; pursued as an end in itself, it is incapable of yielding happiness. It is basically, essentially, the same all over, for the rich and the poor, for the superior and his subordinate, in this country and that; it is characterised by defectiveness, incompleteness, transiency. We should always bear in mind this characteristic of prapancha and not be led to envying another for having something that we do not possess; we should be content with what we have.
Position in the progress in paramartha cannot be granted by one person to another; it has to be attained by dint of one's own effort and action. The importance and need of paramartha is poignantly felt in times of pain, suffering, and misery, not while prapancha is apparently affluent and happy. This apparent happiness always culminates in unhappiness and misery.
When our sensual desires join hands with tempting circumstances, the desires become strong and we succumb to them. The desires gradually wane if we resolutely refuse to yield to them. The remedy to foil temptation is resorting fervently to nama-smarana. Those sensate pleasures which present themselves in the ordinary course should be accepted passively, without voluntary enthusiasm, only as a duty. This will weaken passions and render them harmless.
The clinical thermometer only indicates fever, but does not cure it. Similarly the shastras point out where we go wrong and how to correct ourselves; the action is entirely with us. Shree Samartha did meet Rama; why is it, then, that we do not? The plain answer is that we lack that staunchness of faith, and that persistence and regard for the devotional practices. Never forget that you belong to and live for Rama. He will certainly not expose you to want of life's necessities. If you repeat nama with firm faith, and forget yourself in it, you will live ever so joyfully.
* * * * *
Posted by Raghunath at 6:02 AM No comments: 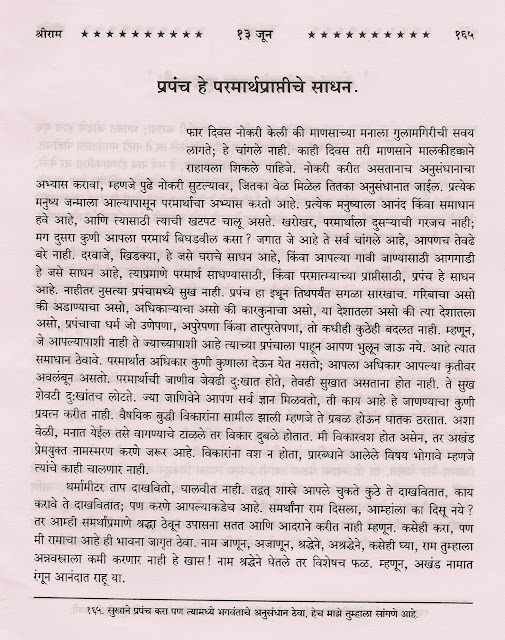 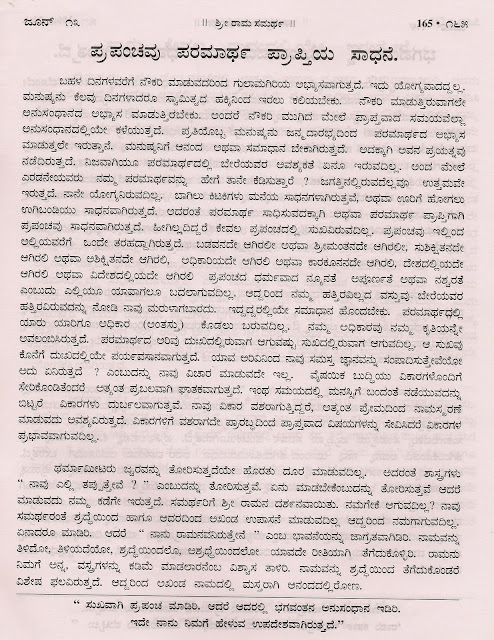