Motive for any Action Must be Clean
Of the three gunas, tamas, is the most akin to inert matter; and therefore its effects are most easily, widely, and quickly perceptible. Tamas directly vitiates thought and desires. Man, however, has the capability of purifying the mind, by profusely repeating nama; for, this leads to the development of sattwaguna which gradually purifies the mind. That God can be attained by mere disciplinary practices and mortification of the body and the mind, is a mistaken notion; were it correct, workers toiling in the scorching sun to break stone into road metal would have been among the first to attain God. We should remember, God concerns Himself with a man's disposition and the state and tendencies of his mind and heart, rather than with mere physical acts like mortification.
One may create in people's eyes an image or impression of great devoutness by mortification exercises like say, fasting, and yet secretly entertain a mundane objective. God, who resides in all hearts, cannot be so deceived. We should, therefore, aim at practising what we preach or say; in the path of spirituality nothing is more harmful than hypocrisy. To get lost in contemplation of God and thus forget to take food is far better than intentional fasting. We should get so engrossed in spiritual meditation that we acquire constant, unbroken awareness of God's presence. It matters not, in this state of mind, whether the body does or does not take food. On the other hand, mere fasting without such awareness of His presence will only lead to weakness of the body.
It is the motive behind any act that determines the intrinsic value of the act. God will readily condone an unorthodox action if the motive prompting it is pure. On the other hand, an apparently good action with an ulterior motive may keep God away. An action free from expectation of any kind will be highly appreciated by Him. We should strive to win God purely for His own sake. Indeed, if He were to present Himself before us and to offer to grant our desire, we should only ask for His name; this is true desirelessness. A manifestation of God may disappear some time or other, but His name abides for ever. As long as His name is with us, it is incumbent on Him to come to us.
* * * * *
Posted by Raghunath at 6:00 AM No comments: 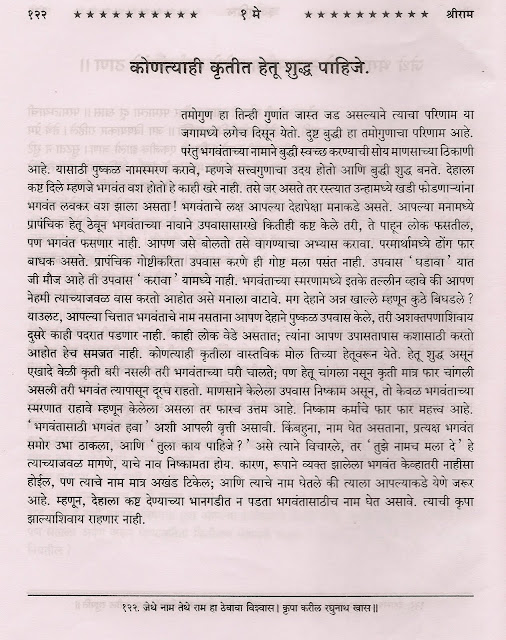 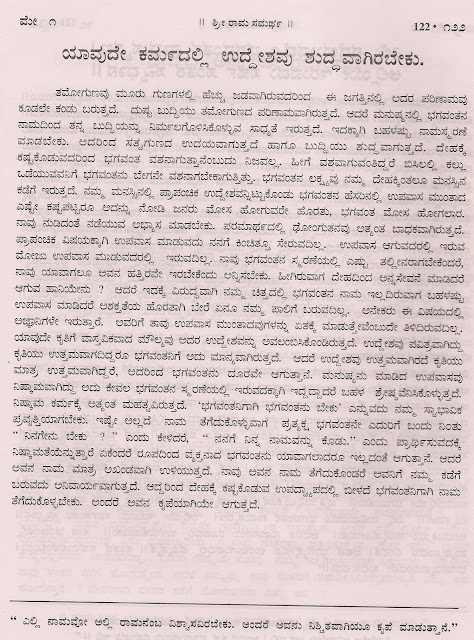