One who Endears Himself to God is Loved by allSome people feel that God should endow them with some special capacities to enable them to do some public good. But why desire that the good should happen through a particular individual? Does it not mean that the 'body-am-I' feeling is fully operating in the particular individual? God may so endow persons who can wield such capacities. What is the wisdom of handing a sword to a young person who has neither the requisite capacity nor discretion? You feel that people should respectfully listen to what you preach, although you have no proper control over anger, perhaps, or other mental reactions. First master your own mind, and then think of giving guidance to others. Do you want to be popular among your brethren? Then first endear yourself to the King of Kings. People may seem to be in dire need of being improved, but do not rush headlong into the task. Remember you have enough evil in you if you see evil in others, and so you have a need first to improve yourself; you will thereby cease to see faults in others.
Little girls play at home-making with dolls and a wendy-house. They feed the dolls and lull them to sleep. In the heart of hearts, they know that the dolls are lifeless. Why don't you similarly imagine that God and you converse with each other? As your sentiment deepens, you will find that God and the conversation assume reality. Relate yourself to God in some way or other. Since our entire life is in His hands, the individual happenings must be so.
We often perform 'sattvic' acts, but bear pride for them. Sattvic actions are certainly highly commendable, but it is highly harmful to feel pride for them. Indeed, even bad actions are preferable, because there is a possibility of regret and repentance being felt for them some time or other. But where is the chance for removal of pride for sattvic acts? Suppose a man helps a friend or relative, and the obligee later says, 'After all, he helped me because he could afford to, so it is hardly any special goodness on his part,' and the obliging man feels hurt; does it not indicate a latent pride in him? Why should he feel hurt, instead of feeling that it is God's favour that he had the capacity, the opportunity, to make himself useful? So it is best to ascribe everything to God.
* * * * *
Posted by Raghunath at 6:02 AM No comments: 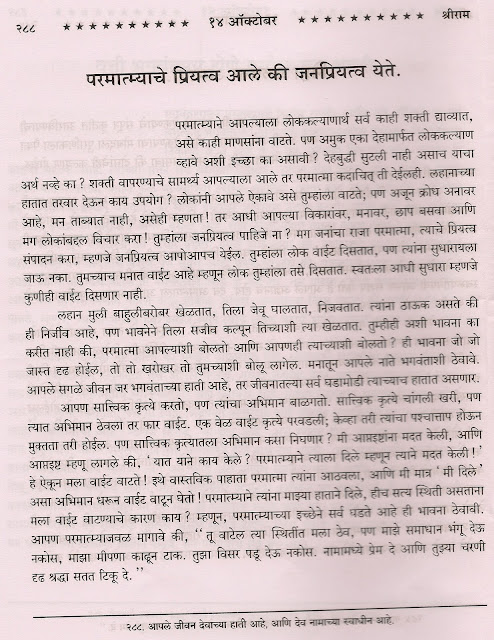 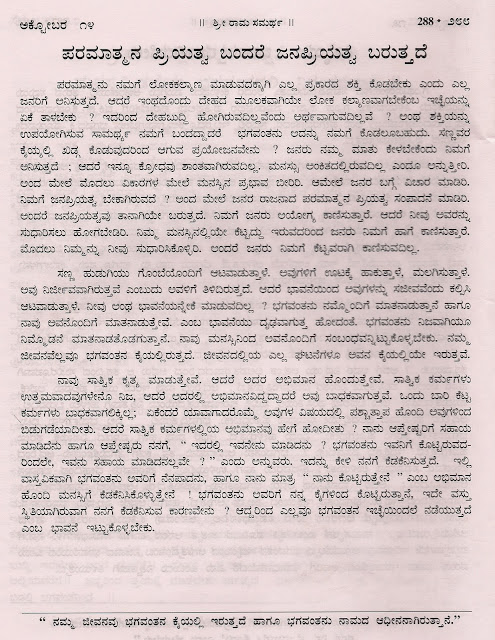