To chant nama with implicit faith means doing it because one's guru or some such highly regarded person has advised it. If chanted with this faith, there are no misgivings. Such faith, however, is a matter of extremely good fortune, and is rarely to be found. Misgivings in regard to nama may be of various types, such as, whether nama-smarana done without concentration is of any use, what (yogic) posture it should be done in, where to settle the sight, whether nama; smarana should be preceded by ablution, and so on. We may comprehensively state all these in a single doubt: does my chanting of the nama at all reach the divinity? Actually, God and His nama being identical with each other, nothing can come between the two. If a person hears his name uttered even from behind, he instantly looks back. If this happens with man, should we not expect it with God, who is omniscient?
As a matter of fact, that a person utters God's name is only because of His grace; that is, it is He who utters it; how, then, can we doubt whether the nama reaches Him or not? Imagine that two persons sit down to dinner, one eating heartily, while the other, with a mind preoccupied with some thought, eats but absent-mindedly. Which of them will remain hungry at the end of the dinner? Neither, because both of them have had their fill. Likewise, how can the nama, remembered in any way, go to waste?
Suppose you write to an unacquainted person and ask him to see you; he calls on you and says, 'I am the person you have called'; we believe him. Now the lord has Himself said, "I, the Supreme Lord, am ever present where my name is chanted." Why do we disbelieve it? Why do we not take His nama and see Him therein? This is faith.
Our father's name is put following our name as we are born to him. We should do the same in the case of God. We should live in His nama, with the firm belief that he is the doer of everything, our protector and saviour, and there is none else that we can call our own in this world. One who so makes God his all-in-all, is raised by Him even higher than Himself. Chant nama with the unshakable faith that alone will lead you to God. 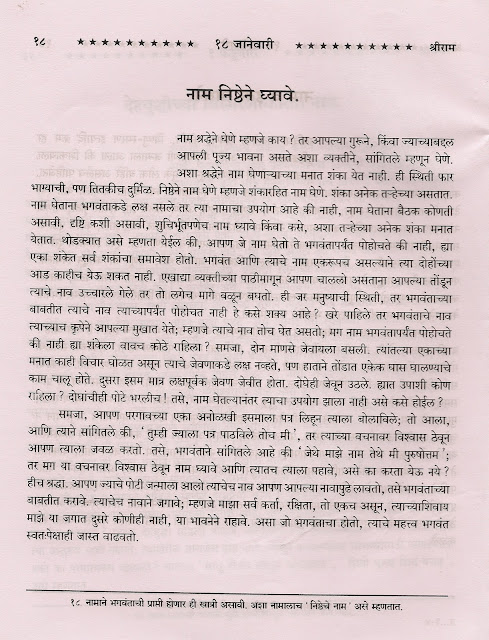 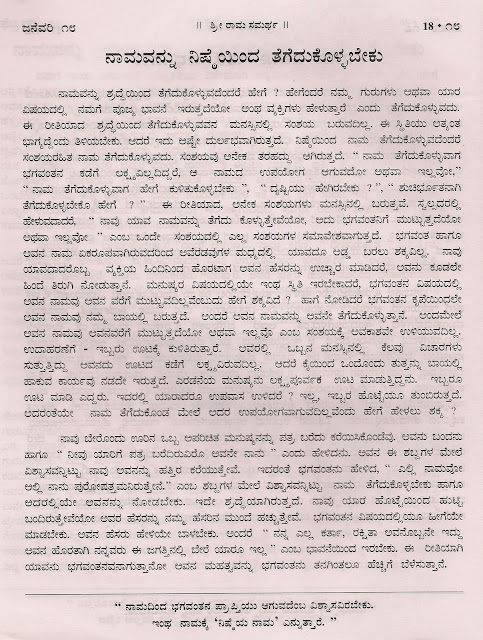