Man's entire struggle is for lasting contentment. Because such contentment is only with God, everyone needs Him. Everyone says that despite his efforts he has not succeeded in attaining God, and blames circumstances for the failure. Let us consider the problem in earnest.
Circumstances are of two kinds: external, and internal. The first and foremost factor of external circumstance is bodily health. Can we do nama-smarana irrespective of the state of health? The Lord states in the Bhagavadgeeta that it is possible to do nama-smarana even at the moment of death, when the body becomes very weak and infirm. It is therefore incorrect to say that the condition of health affects nama- smarana.
Many complain of financial stringency, and say want of money gives worry and prevents giving attention to God. Now tell me, how many of those who have amassed vast wealth and reached the pinnacle of prosperity, turn to nama-smarana? How many kings have quit their kingdom and turned recluse with the object of attaining God? Therefore, want of money cannot justifiably be put forward as a reason hindering the attainment of God. On the contrary it is money that lessens faith, for it gives a false sense of security. One saves money against needs of advanced age; but what guarantee is there that one may at all live to be old? Happiness and contentment have no relation to money. Every person has his retinue; when the king of ghosts is in procession, he is followed by ghosts and evil spirits; whereas, in His procession, God will be accompanied by compassion, forgiveness, and a spirit of joy. Similarly, accumulation of money is followed in its wake by anxiety, avarice, and dissatisfaction. A woman may resist the adulterous advances of a man, but money does not resist even ill use. It is almost always money that causes discord between even a parent and son or daughter, or between siblings or between friends. It cannot be said that to collect money is improper; but it should not create a sense of security, nor should it be allowed to stand in the way of consciousness of God. When the desire to attain God arises, that will itself show you the way to Him.

Posted by Raghunath at 6:02 AM No comments: 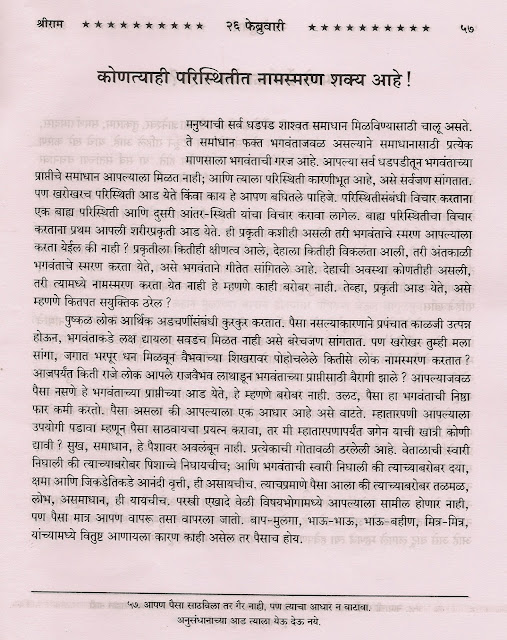 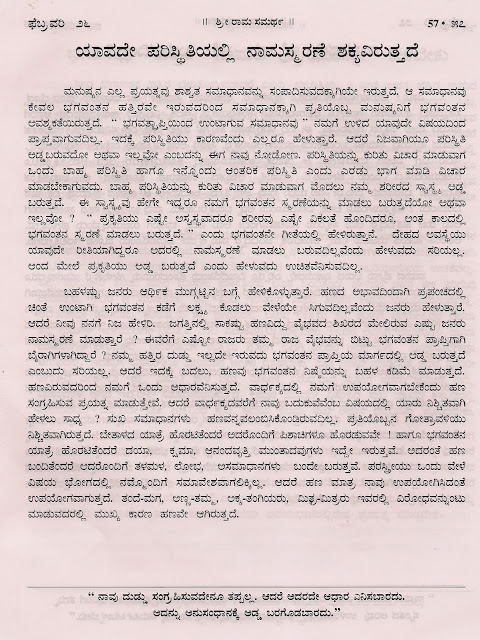