Knowledge is a Two-edged Sword


He is a true writer who writes with a burning sincerity for the well-being of mankind; he is a true preacher who preaches only after acting up to what he preaches; and he alone can be called a real listener who puts into practice what has been preached. Means of disseminating knowledge have become proliferous nowadays, and these are often misused to spread knowledge which is untrue, unwholesome, demoralizing, or otherwise undesirable.
Knowledge is a two-edged instrument which can be used or misused; it is upto the nature and object of the person who wields it. Knowledge which respects social and personal morality and religious principles is beneficial to mankind. It is, by its very nature, sacred, and beneficial to man if founded on the abiding principles of morality and religion. Such knowledge is desirable and beneficial as augments mutual regard and goodwill between the rich and the poor, the learned and the unlettered, the young and the old, men and women. Such knowledge alone deserves to be spread. One should not disseminate knowledge which is likely to cause or augment hatred or disaffection between peoples and individuals, or spread disregard for moral discipline. They are not true scientists and technologists who bring forward inventions which only breed greed and selfishness, for they pave the way to the disintegration and destruction of humanity. Knowledge which does not impart and increase contentment is pseudo-knowledge. Only that knowledge deserves the name which enables us to understand the real nature of the universe.
Since I call this 'my' body, the real 'I' is evidently not identical with it, is different from it. A prapanchi person is one who knows only the tangible world, while a philosopher is one who understands the true nature of the world, the mystery of it. Happiness comes only from the knowledge of the subtle. The Cosmic Soul is like an ocean, whereas an individual is in every way no more than a drop in it. True philosophy is to realize the identity between the two. The importance, the greatness, the limitlessness, the prowess of nama cannot be understood by dint of study, but only through the grace of a saint. It is the greatest good fortune to have complete faith in nama. We should beware of this faith being shaken. True, firm contentment can only be achieved by ceaseless repetition of the divine name with full, unshakable faith in the word of a saint.
* * * * *
Posted by Raghunath at 6:02 AM No comments: 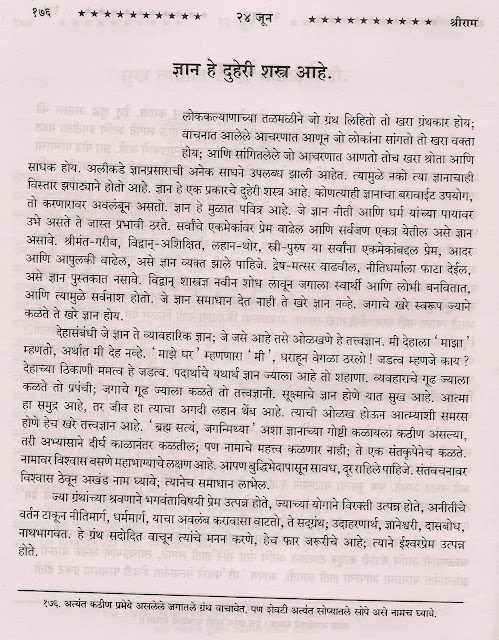 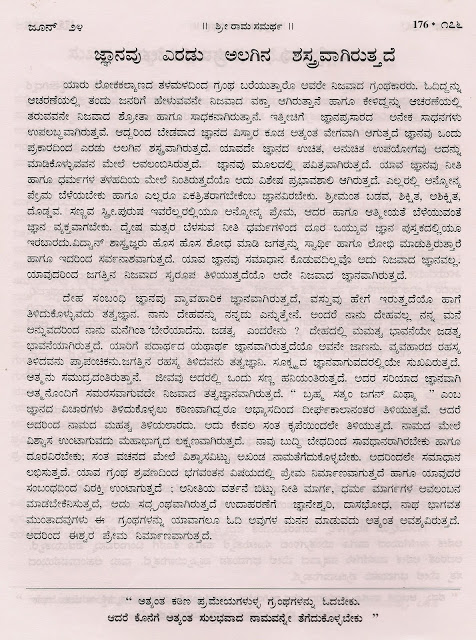