Nama is the Royal Road to God

Nama is the royal road for reaching God, but we do not realise its pre-eminence without His grace. Indeed, nama-smarana(chanting of Divine name) is the supreme sadhana, vital as life itself, while the other sadhanas are of subordinate importance, like the limbs. Nama is most auspicious and sacred. Remember well that our life is in the hands of God, who is Himself in the hands of nama.
Yoga gives contentment only while it is being practised, whereas awareness of nama gives lasting contentment. We cannot adopt the nirguna form of worship unless and until we ourselves become free from gunas. Vision of the celestial light or audition of the eternal sound, are such things not in the sphere of gunas? On the other hand, to see God as the essential element of all creation, is truly to transcend the gunas. Yoga, therefore, should be adopted in so far as it can aid in nama-smarana, but not for its own sake.
Nama includes and transcends Yoga. All sadhanas finally culminate in nama-smarana. Visions of divine colours or light or sound are like intermediate stations which nama-smarana passes by; it takes us straight to God, the destination. Other means may show results early, but these are often transitory; the results of nama-smarana may not be noticeable early, but they will be abiding, because nama effects basic improvement. Indeed, nama­smarana is the means par excellence to reach God. It consists of pure bliss; in the ecstasy of that bliss, a man will lose all individual awareness. Saint Tukaram says that his tongue became uncontrollable; that is; in the ecstasy of nama-smarana, it went on uttering nama ceaselessly, far beyond his expectation, like an unbraked vehicle rolling down a slope.
Four persons suffering from the same disorder had varying financial means. The physician prescribed the same medicine to all, but with different "vehicles"; the poorest with the juice of tulsi leaves, the next richer with honey, the next with saffron, and the richest with musk. Similarly, nama may be sung according to the individual's capability. It may be uttered plainly, it may be repeated with passive faith, it may be coupled with a control on basic inclinations, or remembered as the sole truth in creation; all will profit from it. 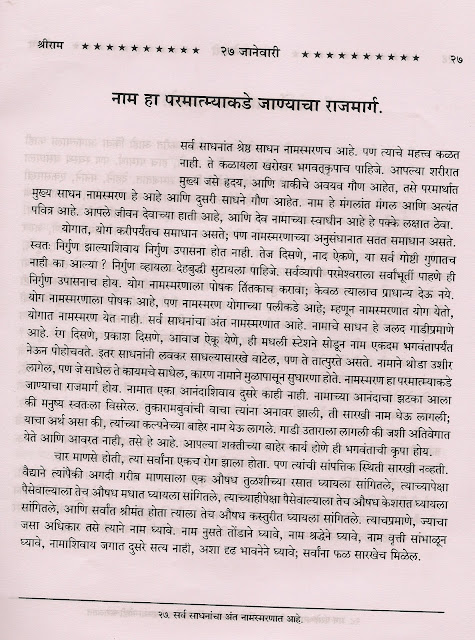 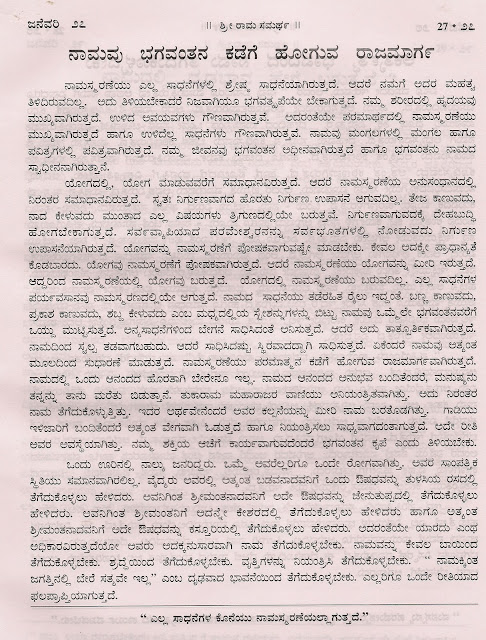