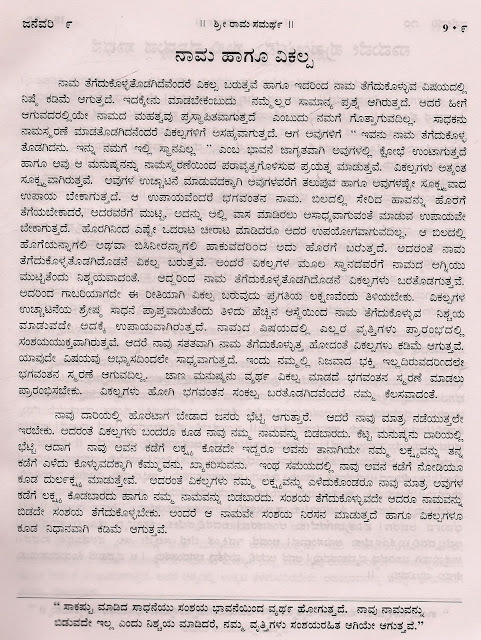 Posted by Raghunath at 8:00 AM No comments:

It is a complaint very commonly heard that doubts and suspicions beset the mind whenever we start chanting nama, and they weaken conviction and faith. However, we do not realise that this itself establishes the importance of nama. The demons of doubts and suspicions become restless when a man resorts to nama-smarana. They resent his action, fearing that they will one day be ousted; so they revolt, and seek to distract such a person and dissuade him. Distractions are very subtle, and the remedy to counter them must be equally subtle; nama-smarana is the one such remedy. The means to be employed to draw a snake out from its burrow must reach and drive it from the burrow; merely raising a hue and cry outside will not be of any avail. What is wanted is pouring scalding water into the burrow, or forcing in an obnoxious gas or smoke. Likewise, chanting of nama causes doubts to rise to the surface; this signifies that the heat of your ardour for nama has reached the source of doubts and distractions. Hence, rather than getting bewildered or alarmed when doubts crowd the mind during nama-smarana, one should chant nama with redoubled zest, in the knowledge that one has now found the master-remedy against doubts.
To begin with, all are sceptical about nama; continual chanting steadily overcomes doubts. Lack of devotion makes one forgetful of the Supreme Being, while lack of practice in remembrance of the Supreme Being causes lack of devotion. The wise should, therefore, discard, or at least ignore, doubts and distractions, and take to practising nama-smarana. The objective will have been gained when all doubts are eliminated and nama becomes firmly established in the mind.
It is common experience that when walking along a street one comes across persons that one would rather avoid. What one does is to ignore them. Some of them, however, purposely clear the throat or otherwise draw our attention. Likewise, if doubts thrust themselves on us, we may reluctantly notice them, and persist in the chanting of nama, so that nama will itself eliminate them in course of time. We should take care to remember nama unceasingly. Even a lot of effort may come to nought if done sceptically; if we determine to persist in nama, doubts will certainly resolve themselves in the end.
* * * * *
Posted by Raghunath at 6:02 AM 2 comments: 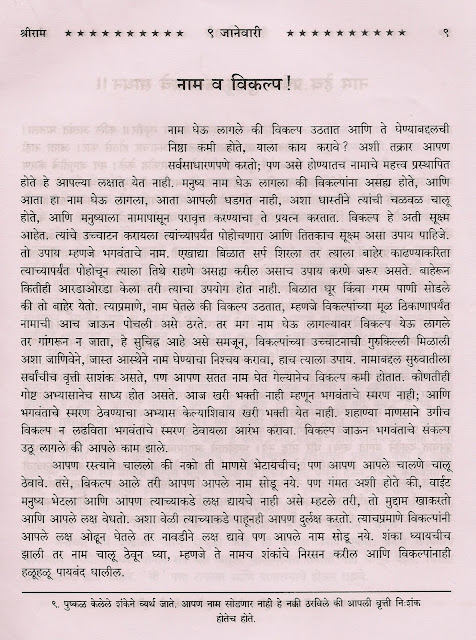