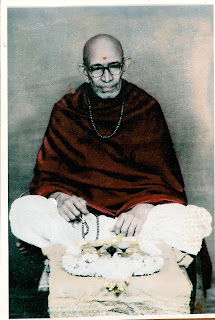 Sri G. Venkannaiah.
(Founder of Sri Brahmachaithanya Sri Rama Mandir,Chintamani)
.
Sri G. Venkannaiah,(1883 to 1969) is a direct disciple of Gondavalekar Sri Brahma chaithanya Maharaj. He belonged to a place called Ganjur, near Chintamani, about 75 kms from . This is an attempt to tell how he came into contact with Sri Brahmachaithanya Maharaj.
.
Sri G.Venkannaiah,was the eldest son of Sri Timmappaiah and Smt.Putta Lakshmma . Sri Timmappaiah was a teacher. He had  lands in  Ganjur village near Chintamani.. Venkannaiah studied civil engineering in in . He was appointed as Sub-Overseer in the Government public works department. In 1913 he had been transferred to Chikkanayakana halli Taluk. He was posted to supervise the construction of a tank in Malligere village,about 22 miles from Chikkanayakana halli. to supervise the construction of a tank.
One day, in November,1913, during lunch break, when Venkannaiah was meditating on Sri Ram, sitting under a tree, he heard a big shout  of “Maha Purush, Maha Purush”. When he opened his eyes, he saw a Saint standing with two disciples, before him. When Venkannaiah prostrated before him, the Saint  asked him to come to Gondavale (Gondavaleyaave), and vanished immediately. Sri Venkannaiah did not know what was said as he did not know Marathi. So, he noted it down in his dairy. In the evening, he returned to Chikkanayakanahalli, where he was residing. One of his friends who knew Marathi, said the word expressed by the saint was, “ come to Gondavale”. But, neither Sri Venkannaiah nor his friends knew where Gondavali was. That night he dreamt of a Sri Vaishnava reading Bhagavadgita, and some one pointed out to him that his doubts will be cleared by the Sri Vaishnava. A few days later, when he was returning from the morning walk, he suddenly came across the Sri Vaishnava of his dream, coming in opposite direction. Sri Rangachar, that was his Name, took Sri Venkannaiah to his home. After learning about his experience, Sri Rangachar, went to the pooja room, closed the door, and sat for meditation. Sri Rangachar, was a yogi, and after an hour, he came out from the Pooja room, and told Sri Venkannaiah that the Saint who gave him darshan was Sadguru Sri Brahmachaithanya Maharaj of Gondavale. He said, that he met Sri Maharaj, in his meditation and Sri Maharaj asked both of them to go to Gondavale. He told that Gondvale was a place in , and explained the route to reach the place. Both, Sri Venkannaiah and Sri Rangachar started for Gondavale with in 8 days. When they reached the place, some of the devotees staying there told them that Sri Maharaj had cancelled his programme of going to some other place stating that he has to meet two devotees from a far off place, on that day. They had a nice welcome and they were allotted a room to stay.
In the morning, Venkannaiah, who was standing behind the group of devotees surrounding Sri Maharaj, was called by Sri Maharaj .
Sri Maharaj  initiated him to Ram-nam, by whispering the Taraka Mantram in his ear.. He asked him to do: 1. Do Namasmarana without break. 2. Spread or propagate Rama-nama. 3. Construct a small Ram-Mandir.4. Carry on Upasana.
Sri Venkannaiah returned to his place and started his Anusthan. After a month, Sri Venkannaiah received a telegram intimating   Sri Maharaj’s departure from his mortal body. Immediately, he went to Gondavale and participated in the funeral ceremony.
.
Sri  Venkannaiah, who was in the Government service,  could not plan to construct the Sri Rama Mandir  early, as he was being transferred from place to place. But, he did Bhajans and japaanusthan and pooja to Sadguru paduka, at home. He participated during functions in Gondavale and he even went to functions arranged by Sri Brahmanand Maharaj in Venkatapur and Beladadhi. Sri Brahmanand Maharaj used to call him ‘Mysore Buva’.
Where ever he was transferred on duty, many friends of those places, became devotees of Sri Brahmachaithanya Maharaj. Later on, when he was transferred to Chintamani, his work was in many surrounding places like Hindiganal, Jangamakote, Sidlaghatta, etc where his devotion to Sri Maharaj, secured him many followers,
In the year 1939, a garbha gudi and a hall with thatched roof was constructed in the site previously bought for constructing Mandir, and pooja was carried on with photos of Sri Ram and Sri Maharaj, and Sri Sadguru Padaka.
Then, on , the marble idols of Sri Ram, Lakshman, Seetha, Maruthi and Sri Brahmachaithanya Maharaj, were installed in the divine presence of  Sri Tatya Saheb Ketkar Maharaj, and Sri Kundagol Narayanappa Maharaj.
Since then Anusthan is being carried on.  In early days, with a view of Annadaan, Mandir provided weekly Meals ( vaaraanna) for different students, hailing from different places, studying in Chintamani. His desire of starting a Vidyaarthi Nilaya (Student’s Hostel) was carried out in 1966, by his youngest brother Sri G. Honnappa..
He left his mortal coil on .

He led a saintly life that inspired many to take up Ram-nam.
Posted by Raghunath at 10:32 PM 2 comments:

Consider your success to be a result of the Grace of God. 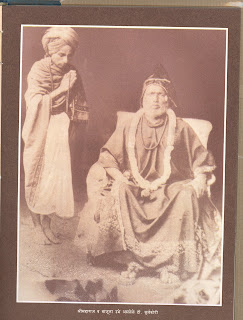 A person was a very important officer in a prison. He used to brag about his cleverness. He once met Sri Maharaj. When asked what his occupation was, he described the importance of his authority and his ability. Sri
Maharaj said to him, "There are many prisoners in your prison. They have been sentenced to varying terms of imprisonment for their various crimes.One such prisoner had committed burglary, for which he had been sentenced to three years' rigorous imprisonment. He remained on good behavior during the term. After he was released, he  began to boast that he never drew upon himself anyone's reproach during the three-year term of imprisonment. How appropriate will his boasting be? It will surely be laughable. Just so, it is a kind of imprisonment to be brought into life. Does it not appear similar to the prisoner's boasting to say that one is so very important and clever? I believe that the true object of existence as a human being is to be discharged from Rama's indebtedness, in the knowledge that all success is by the Grace of Rama."
Posted by Raghunath at 10:14 PM No comments: