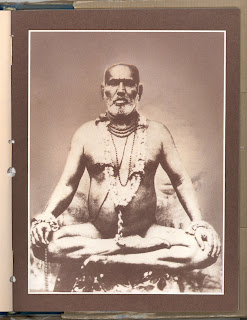 A highly placed government officer received instruction from Shri Maharaj in chanting Nama, and he sincerely set about practicing it. After some time he learnt about the views of J.Krishnamurthy. Because of their influence, his observance of the practice of chanting Nama became neglected. His mind was filled wih doubts about Namasmarana. He frankly admitted this to Shri Maharaj. Shri Maharaj said, "Krishnamurthy did not invite you to his lecture.You went there of your own accord.So, you can not blame him for having caused confusion in your mind. A rustic boy who, having passed his school final examination, joined the first year class of a metropolitan college. Out of curiosity, on his own he attended a philosophy lecture for the students of the M.A.class. On listening to the lecture, he felt so confused that he doubted if would ever be able to complete his course of studies in the college.The state of your mind has become similar to his. What Krishnamurthy advocates is the path of contemplation, Jnyanamarga. One needs to have read a lot to be able to follow it. So, forget what you have learned from him, and begin the practice of chanting Nama. I guarantee that by chanting Nama, your mind will attain everlasting bliss.I,too, could have preached what was preached by him. But, what is the point in prescribing a lesson which cannot be assimilated?It is for this reason that it was not prescribed for you by me."
Posted by Raghunath at 11:10 PM No comments: