The Success of one's efforts depends entirely upon God's Grace.

A young man passed M.A. in English in first class. His uncle asked him to meet Shri Maharaj. The youngster rejoined, "I do not believe in God, Maharaj, and such other things. I am a complete atheist. I do not believe in a supreme Being. So, please do not urge me in this matter." 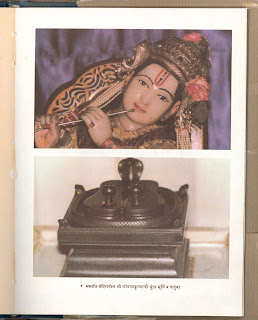 To this the uncle said, "You have visited me with respect in your heart, because I am your elder. In the same spirit, let us visit Maharaj as being a very important person for me." The young man agreed to this, and both visited Shri Maharaj. At the time Shri Maharaj was giving a discourse, advocating that one should observe the practice of worship, remember Him always, and think of Him continually for one's welfare, for it is according to His wishes that everything takes place. When this was over,the uncle introduced his nephew to Shri Maharaj, and apprised him of the young man's great success. Shri Maharaj sincerely congratulated him, and counselled him never to fail to remember God, by whose grace he had achieved such success. The young man said to Shri Maharaj, "I do not have the slightest belief in God. I do not acknowledge Rama as a superhuman being.I am a complete atheist." The young man expected that on his saying this, Shri Maharaj would get offended and some altercation would ensue. On the contrary, Shri Maharaj calmly said, "I sincerely like genuine atheists like you. Saintly persons are the true atheists. While you call yourself atheist, claiming that there is no God, saintly persons call themselves atheists, claiming there is nothing in this world except God. That is the only difference between the two." Hearing this, the young man was bewildered. He said, "What makes you say this? While you praise Lord Rama, I say that I do not recognize Him at all. How is it you are not angry with me? On the other hand you say that you like me. How come? To which Shri Maharaj said, "There are so many persons seated here. They all consider themselves to be believers. But when the crucial time arrives, they behave like atheists.On the other hand, your outward demeanor is true to what you feel within yourself:; which means, you are completely honest with yourself. It is for this reason that I like you." After this, Shri Maharaj enquired after his family, and his plans for the future. On an impulse, the boy said, "There is a post of a professor of English vacant in a college in Bombay. I have applied for it. Kindly bless me that I may be appointed to it." Shri Maharaj suddenly said, "You call yourself an atheist. An atheist must show total confidence in his own ability to attain an objective by his own efforts. Therefore there is no question of my blessing you." The young man was non-plussed, and entreated him for blessings. Shri Maharaj said to him,"I will bless you only if you agree to say, "Let me get this post by the Grace of Rama." In the end, the young man said what was required, and Shri Maharaj blessed him. To the man's uncle,  Shri Maharaj said, "So much money and effort is spent on education, and yet on completing it, the boys have no faith in God; what a great abuse it is of money and the youngster's time! It is essential to make such changes in the curriculum that boys with fine attitudes are turned out."
Posted by Raghunath at 10:46 PM No comments: