The Body's Final Arbiter is Death
A man built a new house and went to live there. He took a tenant so that he may have company. After some time, the tenant began to behave as if it were his own house. Because of this arrogance of his, the landlord felt very much vexed. So he brought the entire affair to ShriMaharaj's notice. ShriMaharaj said, "It is not correct for him to act like an owner when he happens to be a tenant. He is committing a big mistake. By all means take legal action against him. But if one also is commit­ting the same mistake oneself, then one does not have the right to be angry with him. Death has a claim upon everyone's body. Death alone is the true master. But, one acts as if one is oneself the master of one's body. Must not God be getting angry as one gets angry with the tenant ? So, keeping in mind always that the ownership of the body is that of Death, one should remain absorbed in nama. Doing so will convince us that God is the master of all. Then, the body being merely on hire, one will not be sorry when leaving it." On hearing this, the man was truly satisfied.
A
Posted by Raghunath at 11:05 PM 1 comment:

An Extrovert mind is like a telescope held reversed
A. sadhaka asked, "Is there the necessity of a guru in attainment of God ?" ShriMaharaj said, "Yes, there is such a nocessity. But which guru is the one that you are referring to ? Lord Dattatreya took twenty - four Gurus.
Ultimately He became His own Guru. We ourselves come in the way of our attainment of God. The sadguru does nothing but teach one to become one's own guru. He turns the mind's attention inwards by getting one to practise namasmarana. He teaches one how to notice one's own faults, by keeping one's faculty of discrimination active. If one holds a telescope in reverse, then a near object appears far away and small. Extroversion is like looking with the telescope reversed. Because of this, God, who is in reality very near, appears to be far away and unattainable."
Posted by Raghunath at 6:36 AM No comments: 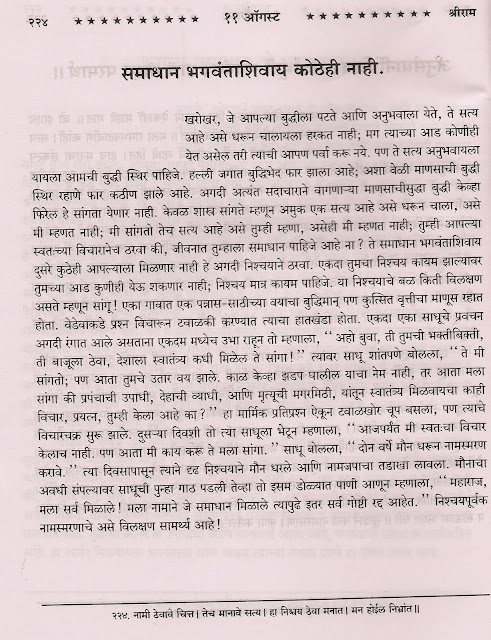 Posted by Raghunath at 6:20 AM No comments: