Sri Rama Samartha
centenary celebrations
64th anniversary of Sri Brahmachitanya Sri Rama Mandir was celebrated for 3 days from 11/6/13 to 13/6/13,. with Great devotion . Large number of devotees participated.
One special feature is : This is the centenary year for the Aradhana of Sri Brahmachaitanya Maharaj. This is also the centenary year for the event of Sri G.Venkannaiah ( Founder of Chintamani Mandir) coming into the fold of Sri Brahmachaitanya Maharaj. It was in 1913, Sri Maharaj suddenly appeared before Sri G.Venkannaiah, in the afternoon at Malligere (Chikkanayakana halli Taluk, Tumkur Dist) and asked him to go to Gondavale (Gondavalyave). Sri  Venkannaiah went to Gondavale and was initiated by     Shri Maharaj with Rama nam. But, about a month after  returning from Gondavale, he received a telegram containing the sad news that Shri Maharaj left his mortal body. 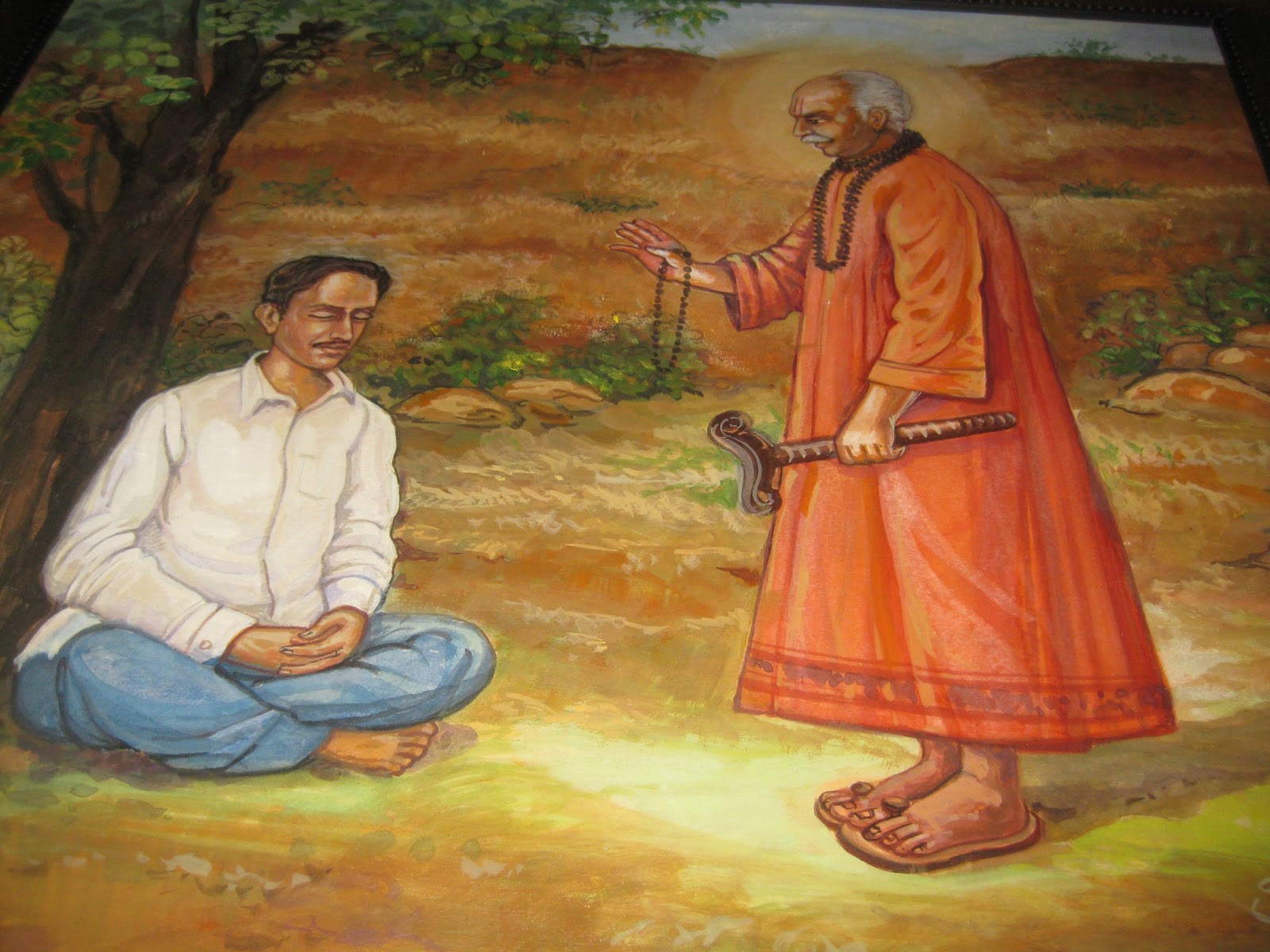 
A detailed account of the divine event of how Chintamani Sri Brahmachaitanya Sri Rama Mandir came into existence follows:

:
Poojya Venkannaiah , was a Sub-Overseer in the Public Works Department of  Mysore State. In the year 1913, he was working in Chikkanaayakana halli Taluk. He had a task of supervising a tank construction in Malligere, a village near Chikkanaayakana halli. Every day, he used to go to the place of work in the morning and return to his home at Chikkanaayakana halli, in the evening.
From young age, Sri Venkannaiah was spiritually inclined and desired the Grace of a Sadguru. In his leisure time, he was always chanting Ram-nam, silently.
One day, after lunch, he was sitting  under a tree waiting for labourers  to return for work.. He was meditating on Sri Ram with closed eyes. Suddenly he heard a big voice “MAHA PURUSH! MAHA PURUSH!”. He opened his eyes and saw in front of him a saint dressed in Kapini and Kulavi. He had two disciples, one on each side. Sri Venkannaiah  prostrated before  the saint. He heard  a voice, “Gondavalyave”. When he got up after bowing, the saints had vanished.
Sri Venkannaiah did not know what was meant by “Gondavalyave”. He noted it down in his diary. In the evening, he returned to Chikkanayakanahalli.
When he narrated about this incident to his friends, one of them whose mother tongue was Marathi   said, it was “come to Gondavale”. But none of them knew where was Gondavale,
A few days later, Sri Venkannaiah dreamt of a Sri Vaishnava reading Bhagavadgita. Another Vaishnava pointed towards the one who was reading Gita and told, “Go to him, Your work will be done”
Sri Venkannaiah , thinking about this dream, went for his usual morning  walk. While returning, he was surprised to see the very person who was reading “Gita” in his dream coming in front of him. After he introduced himself, the SriVaishnava took him to his house which was nearby. His name was Sri Rangachar. It seems he was a Yogi. After listening to Sri G.Venkannaiah about the recent happenings, he sat in his pooja room for an hour on meditation. He told Sri Venkannaiah that on the rail route to Poona from Bengalooru, there is a station called Koregaon. From Koregaon, one has to go by bus or a cart to Gondavale, which is not far. He said , “ there is a saint called Sri Brahmachaitanya Maharaj in the Rama Mandir there.  It is he who has called you to Gondavale. “
Sri Venkannaiah went to Gondavale accompanied by Sri Rangachar. On the day, they reached Gondavale Sri Maharaj had cancelled an earlier schedule to go to some other place, stating that two devotees from a far off place were coming that day.
The devotees were received with warmth and were provided a room to stay.
After the dinner at night, Shri Rangachar who was in charge of the key of their room, found that the key was missing. They searched for the key in vain. One of the devotees told Sri Maharaj, who was sitting surrounded by several devotees, about the loss of the key. Sri Maharaj asked them to look in to the plate in which Sri Rangachar took food.  The devotees were perplexed. All the plates were washed and neatly stacked. But, as it was the order of Sri Maharaj, they removed the stacked plates, and were surprised to find the key in one of the plates.
In the morning, after taking bath in Managanga river, Sri Venkannaiah went to Sri Maharaj who was sitting surrounded by many devotees.  Sri Maharaj noticing Sri Venkannaiah standing behind the crowd, called him forward and made him sit on his lap, initiated him with Taraka Naam. Sri Rangachar was also initiated. Sri Maharaj  asked Venkannaiah to do 4 things:
1)             Do Namasmarana without break.
2)             Spread or propagate Rama naama
3)             Construct a small Mandir (of Sri Ram)
4)             Carry on Upasana

About a month after his return, he received a telegram from Gondavale about Sri Maharaj leaving his mortal body .He attended the last days of the funeral at Gondavale.
Soon, he was transferred to Mysore District.
He continued with his upasana at home, and visited Gondavale frequently. Having a transferrable job, he had to work and stay at different places. At all the places he toured during his work, He made many  friends who became devotees of Sri Maharaj.
However, his desire to construct a Mandir for Sri Ram came into effect only after his voluntary retirement from service.
In Chinamani, which is near his native place, Ganjur, he procured a site for the Mandir, and a foundation stone was laid in 1939. A small garbhagudi was built and poojas were carried out with Sri Guru Padukas and Photos. Anusthan was carried on. The marble idols of Sri Ram, Sita, Lakshman, Maruthi and Sri Brahmachaitanya Maharaj were installed by Poojya Tatya Saheb Ramachandra Ketkar Maharaj and Poojya Kundagol Narayanappa Maharaj on 13th June 1949.
Since then Rama namasmaran and Annadaan are being carried on by the Grace of Sri Maharaj.
Sri Ketkar Maharaj suggested ‘Ramadasi bhiksha’ for the maintenance of the Mandir. Sri B.S. Ramaseshaiah, who was a land –lord and a contractor, offered himself to do the bhiksha. He went round the town doing bhajan and collected rice for the Mandir on every Thursday. This service, he carried out up to his ripe old age of 90 years.
Sri Venkannaiah used to visit Benakanakere (Tumkur Dist),the parental village of his wife. Many of the relatives and friends of Benakanakere became devotees of Sri Maharaj. Many of their youngsters  shifted to Bangalore in search of work. They formed a Bhajana mandali there. And in due course a beautiful Sri Brahmachaitanya Sthira paduka Mandir  was established in Bangalore, by them.  Also, at Malligere, where Sri Maharaj revealed himself to Sri Venkannaiah, the locals have established a small sthoopa and installed  Stone padukas.

In memory of  the person who is Graced by Shri Maharaj for the propagation of Sri Ram-nam, and who dedicated himself following the instructions of his Sadguru, an idol of  Poojya Venkannaiah was installed in the dhyana Mandir (at the basement) on Thursday, 13-6-2013. 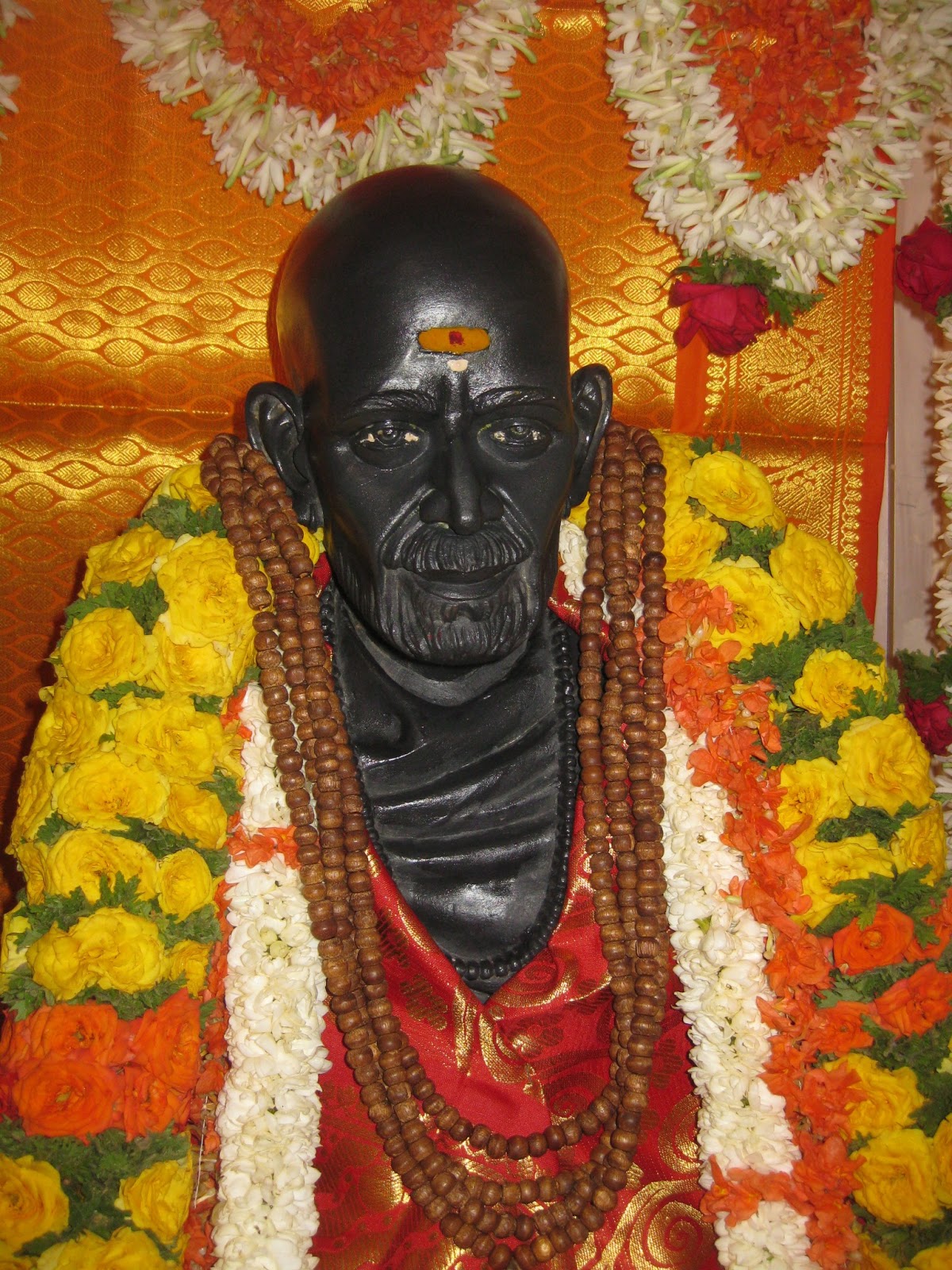 Posted by Raghunath at 5:33 AM No comments: