There is only one fundamental thing, the Ultimate Reality; of which the entire creation is constituted; that is what we term God. This basic element or God is very subtle, intangible, and inaccessible to human reason, intelligence and imagination. Human thought is conceived in words! and the word or words which saints use to designate God or the fundamental constituent of creation is nama. God manifests Himself prominently where there is nama, that is where there is belief in and love for God; that is, where ego is absent. Just as two swords cannot be put in a single scabbard, so, too, God and the narrowly circumscribed ego cannot co-exist in the same heart.
Saints have become one with God. To chant nama is to mitigate personal ego. As love for nama grows, pride of doership diminishes. When doership is assigned to God, volition and desire vanish. Where there is no desire, success and failure cease to matter. A person can be said to have true faith in God when he realizes that all events take place only by His desire and authority, and that some happiness and some unhappiness, some success and some failure, is the very nature of life. That stage is perfection where there is no "I " left even to say that "It is He that is real, not I "; then no ' I ' is left even to say 'I know Him'.
In order to meet and recognize a saint, it is necessary to live in nama. Alongside that, always behave righteously, never transgress limits of personal and social morality, never yield to despondency, never mortify the body unnecessarily; and most important, never forsake nama-smarana. It is for us to do our duty; the result will be according to prarabdha. Indeed, because God is the final disposer of everything, even prarabdha has to obey His will.
To live in nama is tantamount to giving up everything to God. A high officer makes a stamp of his signature; it is as valid as his own signature. Nama is like such a stamp; it has the same effectiveness, the same authority, as God.
He is a true disciple who always lives in nama, thinks of God all the time, obeys the sadguru implicitly. Such an attitude and conduct can alone lead to unshakable contentment.
* * * * *
Posted by Raghunath at 6:02 AM No comments: 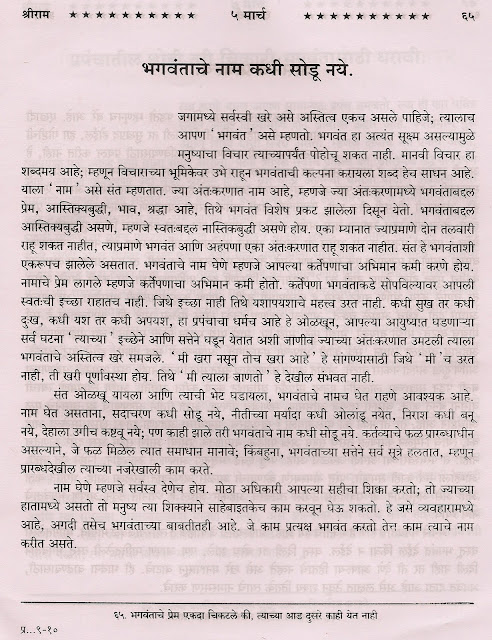 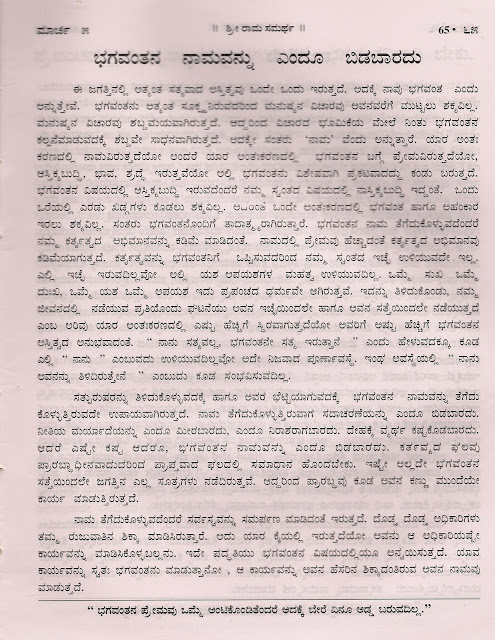