At a conference of thieves, some 'practitioners' of the art proposed that people should be robbed without purposely hurting them, as far as possible, while others expressed the opinion that they must 'earn' the loot and must therefore thrash the victims. Be that as it may, all were unanimous about robbing others! That is, however, hardly different from what we people think and do. One section says, 'We must approach prapancha with a pragmatic outlook'; another contradicts this and advocates doing prapancha with adequate discretion; while yet another pleads for a proper degree of self-interest while doing it. None, however, thinks of God as the basis and the goal! All agree that prapancha is indispensable, whether with God alongside or without Him! In other words, everybody takes prapancha as substantive, and God as an accessory of doubtful necessity or utility, or even a superfluity, a figment of imagination, or a superstition, or at best, a dispensable adjunct.
An inebriated drunkard was raving, singing a song all out of tune. Another, equally drunk, came along and hearing the first, upbraided him, 'What a horrid ditty and what awry tunes! Let me show you what and how to sing.' And after a while, the first drunkard similarly scolded the second! Similarly, those steeped in prapancha start making wild, illogical assertions and enter into wrangles, with similar others. Those who clamour against social restrictions cannot be called sane, for no society can subsist without such restrictions.
Except in cases of gross maltreatment, being a subordinate may be no less pleasant than being the boss. Indeed, being a boss often involves trouble, onus, and anxiety which a subordinate may be spared. In worldly dealings we should have only enough shrewdness to save ourselves from being duped by others' cunningness. However, we should not be wily, should not deceive or decoy others.
The majority of the people I came across in life belonged to the ordinary, average type. I found them good to live with and deal with. They are average in all respects; average in their sin and in their virtue, and even in their urge for the quest of God.
One who has enough to maintain himself and his family at a reasonable standard of life and to maintain a moral standard, may consider himself rich enough.
* * * * *
Posted by Raghunath at 6:02 AM No comments: 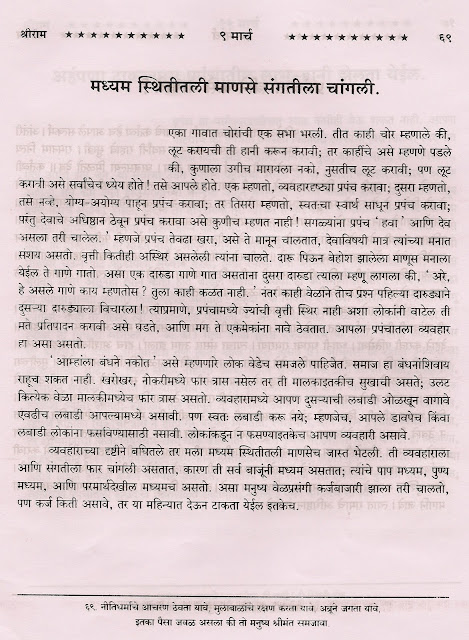 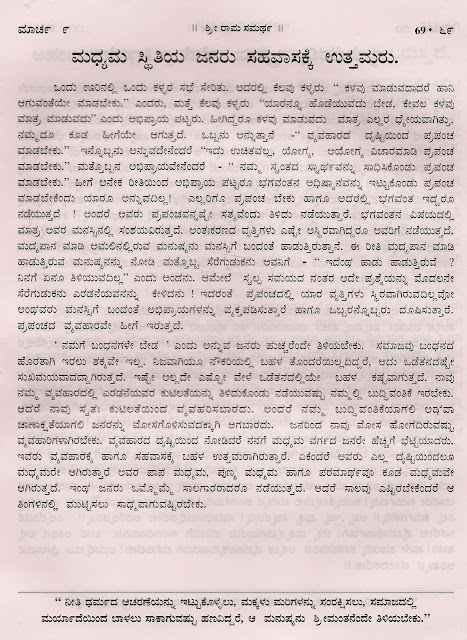