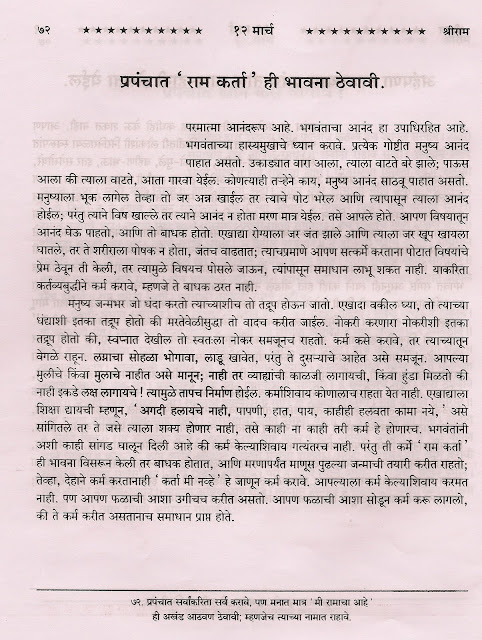 
Never Forget " Rama is the Real Doer"
God is pure bliss itself, bliss neither caused nor affected by anything. If you meditate on His form, visualize Him as with a benign, smiling face. Man looks for joy in everything. A little cool breeze on a hot day pleases him; a shower in the hot season fills him with hope of pleasant relief. In short, he is ever on the lookout for joy, he hungers for joy. Now a hungry man eating food will have joy and the satisfaction from it; but if, instead, he eats poison, he will not have the joy but only death. So, too, a person indulging in sensate pleasures only suffers therefrom. Sumptuous food served to a person with intestinal worms, nourishes not him but the worms; similarly, if we do good deeds not selflessly, but with an ulterior selfish desire, it only fattens the desire instead of bringing us contentment. Therefore, even good acts should be done only as a selfless duty, and then they will not affect us adversely.
Man usually becomes habituated to the practices of the trade, profession, or service that he has followed in life. An advocate, for instance, gets into the habit of arguing and pleading in and out of reason. One who spends a lifetime in service will feel and behave as a servant even in a dream. On the other hand, whatever one does should be done sincerely but detachedly, dispassionately, unaddictedly, purely as matter of duty; otherwise it is bound to become harmful.
After all, it is impossible to remain perfectly still in any single position, without doing anything whatever. To have to do so would be the severest punishment. We are naturally so constituted that we cannot but do something or other, must do one activity or another. Done in forgetfulness or connivance of the fact that Rama is the true doer of everything, all actions affect us adversely, and only lay a foundation for the next birth or incarnation. Therefore, whatever you do should be done in the unshakable conviction that Rama is the real doer and that you are only his tool. We certainly cannot remain inactive, but trouble arises because we look longingly for certain results. If we do things without any expectation of this kind or that, the job is itself its own reward, and gives contentment. 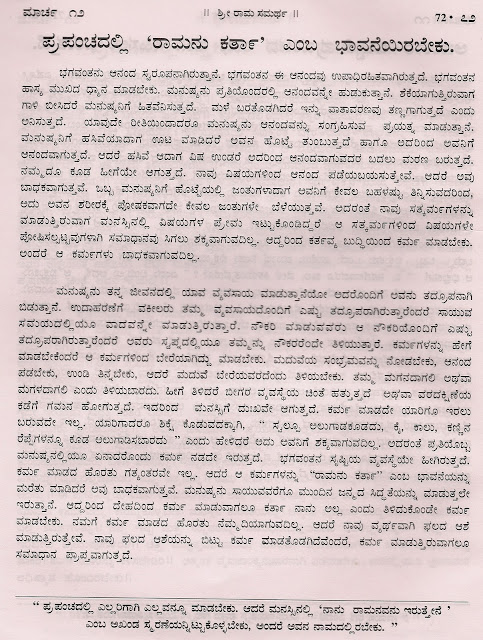