Benefit from Association with a Saint

If it is a job we seek, we approach one who can provide it; similarly if it is realization of God that we seek, we must go to a saint. The saints alone can help us realize God. The essence of their existence is not to be sought in their physical being but in their precept. Their heart is free of passion, attachment, and desires. They keep awake and alert while we are asleep, just like the night–watchman who patrols the city streets. It is then that they test and judge our mental tendencies.
A woman delivered a child, but it started having epileptic fits, and would just lie listlessly in its cradle. It would not grow normally, smiled but feebly, and was not at all playful. The mother felt very sad to see the child's condition. The guru feels precisely like that about a disciple who makes no progress in spiritual practice. On the other hand, he feels elated if the disciple shows some progress, and will fondle and indulge him to no end.
A saint is hardly ever well spoken of in his lifetime. For one person that he uplifts spiritually, there are a dozen of his relatives and worldly 'well-wishers' who blame the saint for 'misguiding' that person. Spiritual books often enumerate the characteristic qualities of a saint; but these are stated in order for us to imbibe and practise, not for putting a saint to test.
Association with a saint is fraught with three kinds of risks: (1) One learns to prattle, but only like a parrot, about spiritualism, (2) one gets undeserved respect from others, and (3) one's behaviour becomes irresponsible, in the mistaken belief that the saint will condone everything and will indulgently uphold him. If properly availed of, however, three benefits can be derived from such association: (1) The person may be respected but will himself remain above any expectation of such respect, (2) he may not be able to prattle about spiritualism but will automatically imbibe and practise the principles, and (3) association with a saint with genuine faith and devotion will automatically lead him to the spiritual goal even without practising any spiritual discipline. Therefore, one who lives with a saint should passively obey the saint, should not expect respect from others, and should suppress all urge to talk about spiritualism. Implicit obedience to a saint is an excellent means to spiritual uplift.
* * * * *
Posted by Raghunath at 6:02 AM No comments: 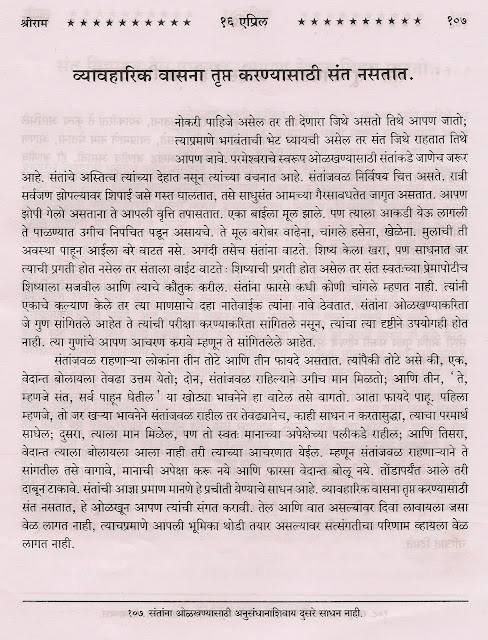 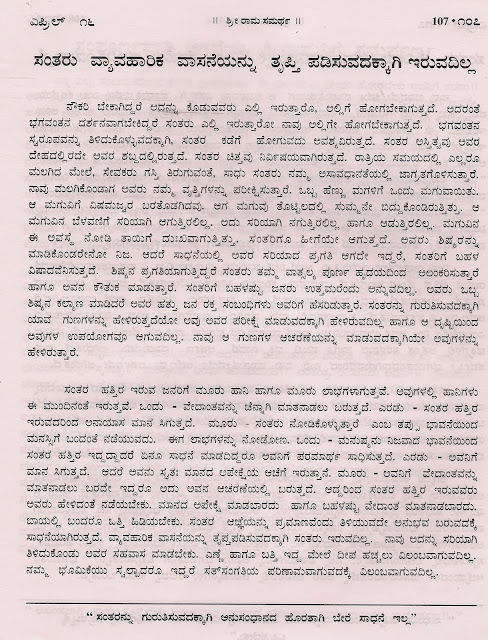