Read Little, but Bring it into Practice
Many people have a consuming passion for acquiring "knowledge", and they feel unhappy if they cannot indulge this restless obsession, which amounts almost to an addiction. An opium-eater does not feel satiated until he is stupefied by the drug. He needs an increasingly large dose to create that feeling of satiation, until, at last, he needs lethal quantities. The passion for "knowledge" has a similar career. One may thus spend the whole life-time in acquiring "knowledge", without ever putting an iota of it into practice; what is the net gain of this?
It takes less than half an hour to eat a full meal, but five to six hours to digest it. If a man merely keeps eating, he will evidently have indigestion, lose his health, and eventually even succumb to death. Such, too, is the case with mere voracious reading to what one can put into practice. Self-improvement cannot be effected by mere reading nor even by understanding a subject, but by practising it in life. We should therefore attach importance to practical application rather than mere academic understanding. True philosophy aims at broadening the mind and outlook, eradicating our selfishness, and replacing it by selflessness. Principles of philosophy are not a matter of mere postulation, but are to be demonstrated by practising in life.
A material thing can at the most be a means of happiness, but we delude ourselves and treat it as happiness itself. As a result, instead of trying to be happy with things that we have, we endeavour to obtain more and more things, and only make ourselves more unhappy. Uncertainty of success makes us anxious and miserable in the beginning; during the endeavour, the travails of the effort make us miserable; in the end, we are frustrated if the expected result does not follow; while if we do realize the expectation, fresh hopes and expectations arise and kill the joy of realization. In brief, we thus suffer unhappiness throughout. On the other hand, if we work without entertaining any expectation, the very act of working becomes its own reward and gives us satisfaction. It is for this reason that saints unanimously affirm that the spiritual quest is like a cash transaction, not one with deferred and uncertain payment.
* * * * *
Posted by Raghunath at 6:02 AM No comments: 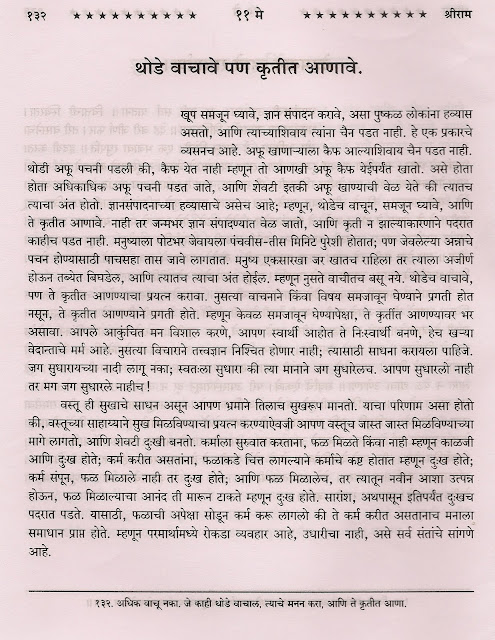 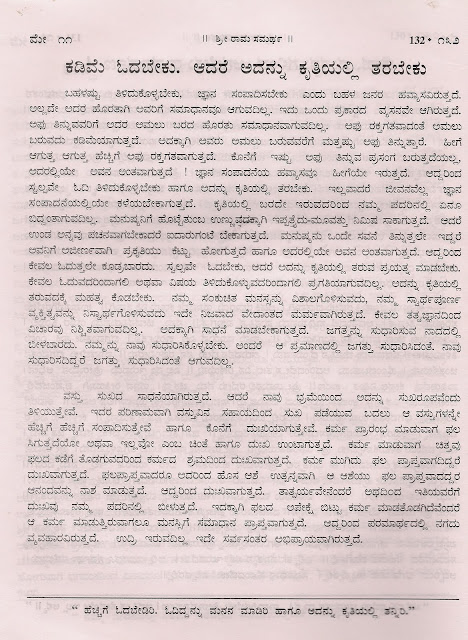