Pride is the Prime Obstruction in Spirituality


The shastras set out in detail the way to succeed in worldly life as well as in spirituality. We, however, treat the former as pressing, the latter as a matter of leisure and convenience. Both require guidance by a knowledgeable person. One capable of giving guidance in spirituality is called sadguru. He alone can be guided adequately who concedes his ignorance. It is personal pride, ego, that prevents us from going to God in submission while, strangely enough, even in petty worldly matters we prefer a 'specialist' in the particular field!
We think that the world in which we live is a real one because it is tangible, experienceable, to human senses and logic, whereas the other, spiritual world is unreal, being only inferable. Isn't it funny that we remain addicted to worldly life discounting our repeated experience that altogether it is far from happy, is indeed, full of misery and disappointment? It is evidently duplicity, then, to plead lack of experience and experimental proof for not taking to spirituality.
'We conduct our life in a very straightforward manner, without deceit, dishonesty, or sin; where, then, is the need to do anything by way of spiritual quest?' This is a question posed by some. It should be understood that however pure worldly life may be, it cannot lead to the divine unless it is completely divested of 'self' or ego, that is, unless all doership is assigned to the Lord. The 'body-am-I' feeling is identical with ego, and rises from desire. He who kills, annihilates desire alone qualifies for divine knowledge.
It is most harmful to be a pseudo-saint; it is by far better to honestly remain a plain, well-behaved householder. Our contentment or otherwise depends on the nature of our outlook on life. What really counts in spiritual progress is, not worldly splendour or prosperity, but the balanced, composed outlook on the world and on life; and the sole way to achieve a steady mind is constant awareness of God.
The 'body-am-I' feeling make's one behave in a very strange manner. Such a person disdains worshipping the tangible image of God as militating against his habit, and a thing out of tune with the times. He decries nama-smarana as being too simple to be effective; and he disapproves of 'anna-daan' as indiscriminate free feeding of the undeserving !
* * * * *
Posted by Raghunath at 6:02 AM No comments: 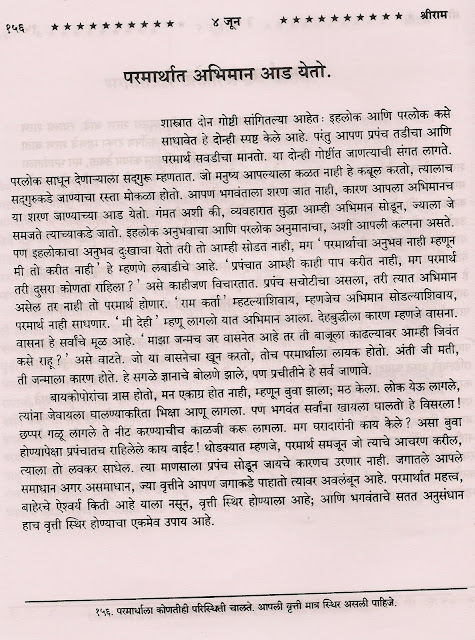 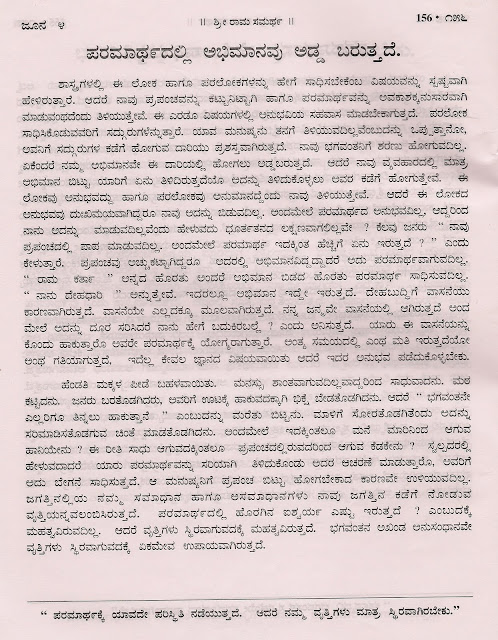