A pure motive is that which looks for neither return nor reward. That is what true devotion must be. Building temples, worshipping, and similar service, japa, and such other things, do not of themselves constitute true devotion if there is the least thought of any return. It should all be for its own sake. With most people devotional duties are merely routine, mechanical acts, carried out by practice, or because of tradition; they should spring from genuine, burning love for God. Action without genuine feeling is as useless as feeling not put into action. We try to carry out whatever is prescribed by the scriptures or the sadguru without imbibing the spirit of them. Such things, therefore, fail to wear out the ego; on the contrary, they feed and fatten it. We should, therefore, implicitly and honestly, carry out the sadhana prescribed by the sadguru. Merely doing something out of the way is of no avail.
Spiritualism does not mean giving up normalcy of conduct; it simply means not getting mentally or emotionally involved in worldly matters. What did Arjuna do? He took Lord Krishna not only as the chariot-driver, but as a guide and mentor; and wherever He took the chariot, Arjuna simply shot arrows at the target indicated. So, too, should we do; we should hand over the reins of our life and being to the sadguru, and thenceforward do nothing more than obey him.
Remember that one who expects nothing from the world, neither money nor recognition, will always stand distinguished from the rest. When we pick up a coin, we have both the obverse and the reverse in hand; so, when we take up prapancha, following paramartha becomes obligatory. Paramartha pre-supposes faith in God; this the sadguru grants and confirms by giving us nama. It is essential that we repeat this nama with perseverance and faith. Paramartha is brought to fruition by ceaseless nama-smarana; it gives contentment in prapancha, and fulfils the very purpose of human life.
One who lives in the ecstasy of nama enjoys the peace and bliss that is God. Repeating nama puts all anxiety away; it conquers the very concept of death, leads one to timelessness. 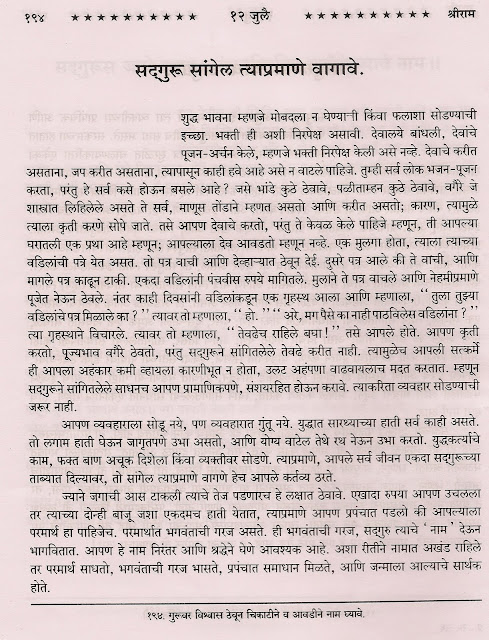 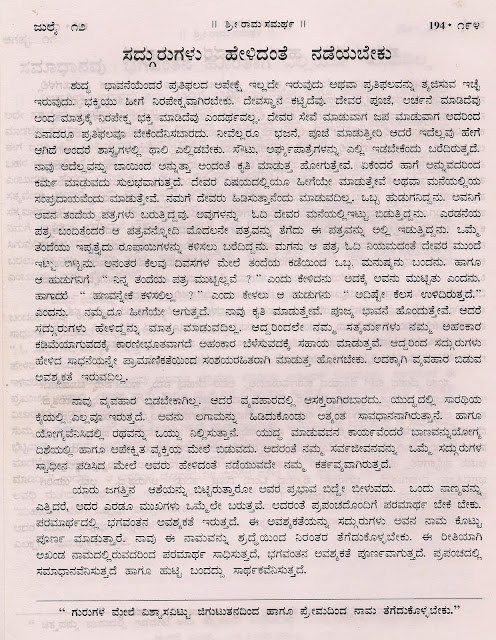