One who keeps his mind riveted at the feet of Rama has really no other sadhana to perform. No one can escape the destined travails of the body, but a Ramabhakta will not feel troubled by them. You, who have now found a sadguru, may rest assured you have nothing further to strive for, beyond maintaining faith in Rama. The true sign of a sadguru is that he, and whoever becomes his, find complete peace and contentment in nama alone.
Surrender wholly to Rama; rest assured that He will shower His grace on you. Leave the body to its lot, keeping the mind at peace and in happiness. Everything in the perceptible world should be treated as shadowy, unreal; and the mind should always be held fixed at the feet of Rama. Ask of God nothing but the love of nama; Rama will assuredly shower His grace on you. Never let anything disturb your peace of mind. Hold to nama dearly, just as a miser clings to money. While not chanting nama, one should feel restless like a fish out of water.
There is no sadhana but tacit obedience to the sadguru. There is no need to mortify the body by undertaking the trouble of any other sadhana. Only keep the mind fixed in Rama and in nama, day and night. One who trusts in Rama and Rama alone, will not expect danger of any kind from any quarter.
One who treats Rama as the only true friend and succour will never feel fear, nor anxiety, nor pain of any kind. There is no better service to one's self than serving Rama. He alone achieves the real aim and purpose of human life who surrenders his mind in its entirety to God. To ascribe all doership to Rama destroys all possible cause for anxiety. Chanting nama ceaselessly will impart a sense of satiation. Contemplating nama without cessation, living in the presence of God, and implicitly obeying the sadguru -- these constitute the mark of a true disciple. There is no other way to attain permanent contentment. One who firmly adheres to these things need do no other sadhana ; for him God is never far. Never for a moment think that anything but nama will secure your ultimate interest. Seek not to find me in anything but nama, for it is in nama that I reside; indeed, I am one with nama. 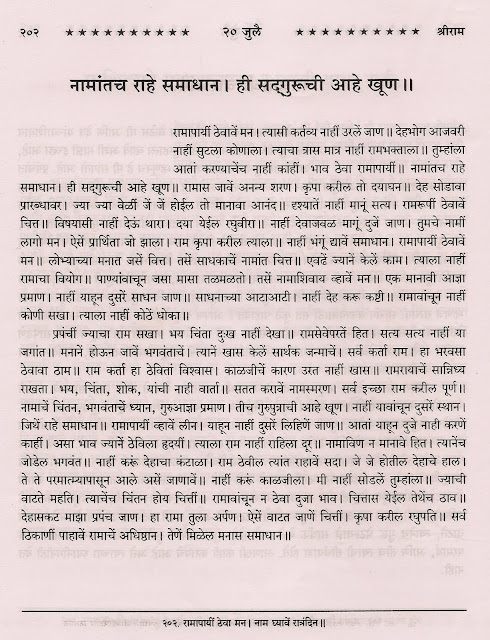 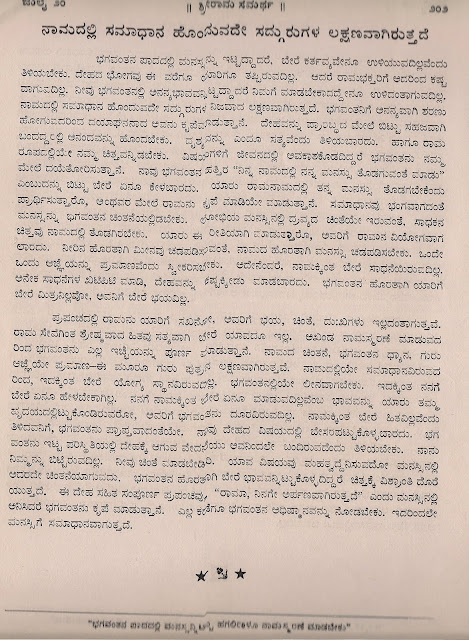