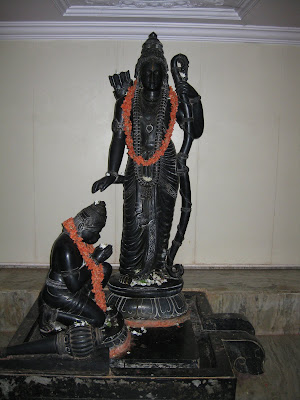 Peace of Mind Comes only by Nama-smarana


An unperturbable peace of mind is the prime sign of a saint. Peace is disturbed not by external circumstances but by internal instability on account of selfishness. There can be no peace where there is duality, a feeling of being different from God. A feeling of one-ness with God gives real peace of mind; this is the very foundation of all spiritual quest.
Wealth and popular acclaim are both transitory, and the sense of security and pleasure they may give are equally short-lived. Two things destroy peace of mind: regrets over the past, and anxiety about the future. When we firmly realize the futility of either, knowing that both are as God dispenses them, then there remains no reason for losing peace and contentment.
Another necessary thing to obtain stability of mind is good, virtuous conduct. In its absence, there can be no peace; remorse will kill it. If we remember always that God is omniscient, that he is a witness not only to every act but also to every thought, there will be no possibility of an improper action. Virtuous, dutiful action is the very foundation of spiritual progress.
There was once a sadhu who was completely attuned to God, immersed in Him. A kindly passer-by found him sitting, with the blazing sun fiercely beating on him in the face. He picked the sadhu up and put him under a tree in a neighbouring farm. In a short while people started coming there to see the sadhu and the throng hindered the ploughing work of the farmer, so he picked up the sadhu and placed him in the shade elsewhere. The sadhu was, all the while, utterly unperturbed, being fully occupied in contemplation. So what is required for peace is not quiet circumstances but freedom of mind from anxiety, uncomplaining acceptance of God's will, and absence of doership.
Kings have fought; won or lost, ruled and died, and passed into oblivion; but the names of saints not only live on but endure on the lips of everyone, because the saints were embodiments of peace. How can such peace be acquired? By nothing but ceaseless remembrance of the Lord, by unquestioning faith that everything that happens is by His will. Peace disturbed by the crossing of our desire or expectation will soon be restored if we immediately resort to nama-smarana.
* * * * *
Posted by Raghunath at 6:02 AM No comments: 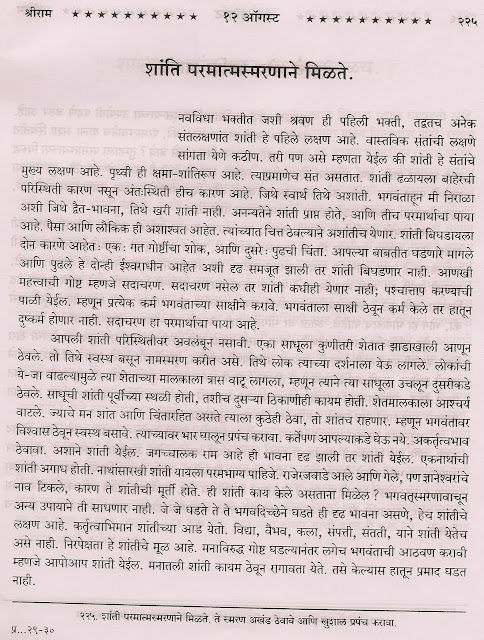 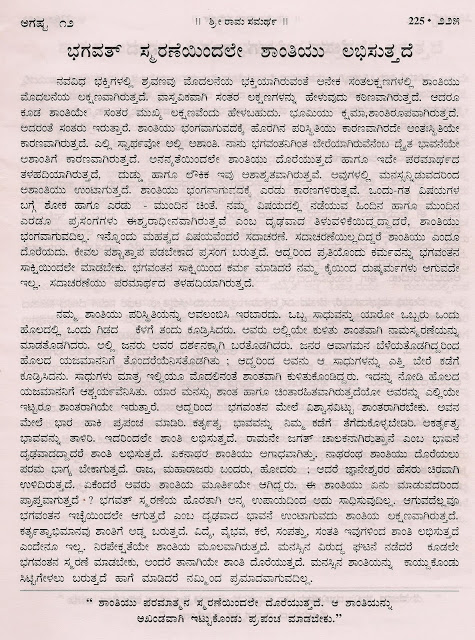