Be at Rama's Feet, Chant Nama Day and Night


Rama's name is a formless saviour; chant it repeatedly. Hold to it firmly and you will be free from the cycle of birth and death. Shri Shiva recited nama for overcoming the effect of the poison he swallowed. The stories of Valmiki and Ajamela also show the importance of nama. In heaven, earth or hell, nama alone is the most effective remedy. Hanuman jumped across to Lanka by holding nama firmly in his heart. This sense­ world is like an empty dream. Therefore, take the support of nama, the abiding truth.
Chanting of nama reduces sins to ashes. Many precious stones and other items came to surface when, in the mythological times, the oceans were churned. Nama is much more precious than those items. Even the teachings of the vedas are rectified in the process of chanting nama; it is simpler and achieves the same goal as yoga. The human mind itself is Shriram, and the soul animating the body is Atma-rama. It is the same Ultimate Reality that pervades and activates the entire universe, and therefore you should learn to recognize its manifestation among all the people; merge your own 'self' with this manifestation while maintaining nama on the tongue. The great Vasishtha merged with the 'self' and Shriram Himself became enslaved by accepting his tutorship. That is why, like a humble servant, I say that one who remembers Shriram does not have to worry about worldly affairs. Nama is a mine of truth, meditate on it. See Shriram everywhere, amongst all humans and animals. Protect the sacred cow, be compassionate to everybody, feed every visitor coming to you, discard sense pleasures by association with saints and remain in nama, unmindful of everything else.
Do not waste even a single breath, earnestly aspire for nama alone, don't be carried away by the vagaries of the sensitive, subtle mind.
I take your leave now. But please listen to my last earnest request. I have told you today the sacred secret of Rama, nothing else is required. Follow this secret and become entitled to liberation. My sadguru has graced me with the name 'Brahmachaitanya'. I am only a humble servant, constantly chanting nama. 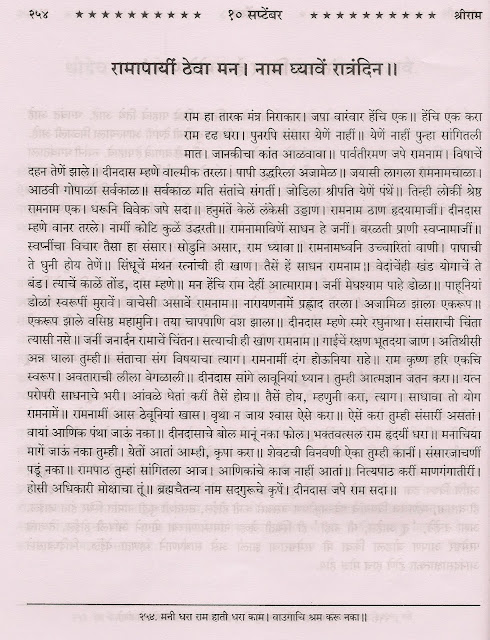 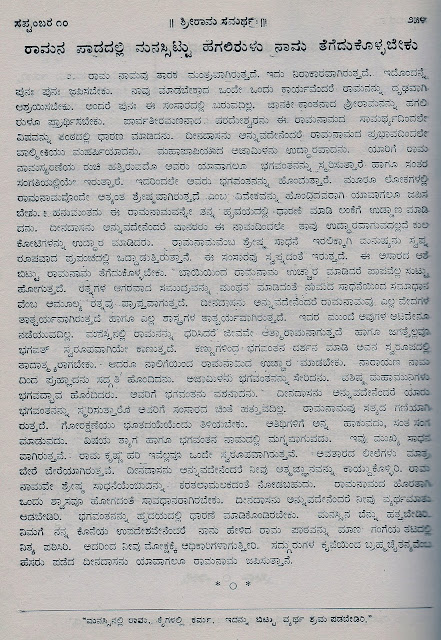