Human Effort should be Backed by Faith in God
Shree Samartha declares that not a single one can be found on the face of the earth that has all happiness. And we, on the other hand envy a prince in a royal family as a lucky one because he lacks nothing. True, he may not be hard up for food and drink, but how can we surmise that he has no other worry at all? When struck by misfortune we may blame some unknown action by us in a past birth; simultaneously, we do something with expectation of good to materialize in the next birth! We seek no escape from this vicious circle of life and death. Even the so-called great men and women get stuck in action by entertaining hopes of one kind or another. We have at long last come by the human form with the potential capacity of attaining God, but what good is it if we work with expectation and get re-entangled in this endless cycle? We marvel at the number of wheels we see rotating in a factory, but overlook the prime mover which may be unseen there. Similarly, we may marvel at the multifarious activities and faculties of a person, but entirely overlook the soul or life that animates his body and without which the body is but a carcass. It is the soul whose presence is necessary for the activity of the body or the faculty.
A man on bad terms with his brother noted in his will that his dead body should not so much as be touched by the brother. Is this not a supreme instance of hatred and the 'body-am-I' idea? Man often occupies himself with thoughts of yesterday and tomorrow instead of doing what is proper to do today. Many persons are eager to know what is in store in the future, instead of doing something today to ensure a happy tomorrow. This is under the influence of maya. Such people worry about tomorrow while, at the same time, doing something improper today. Remember that, after all, situations keep changing, so evil days are bound to be replaced by better times. So never give up working for the better, leaving the result to the judgement of God. The next step is to work without any expectation whatsoever. Chant nama incessantly, leave everything to Rama, never spare effort, fear not death, and never worry about life in general. 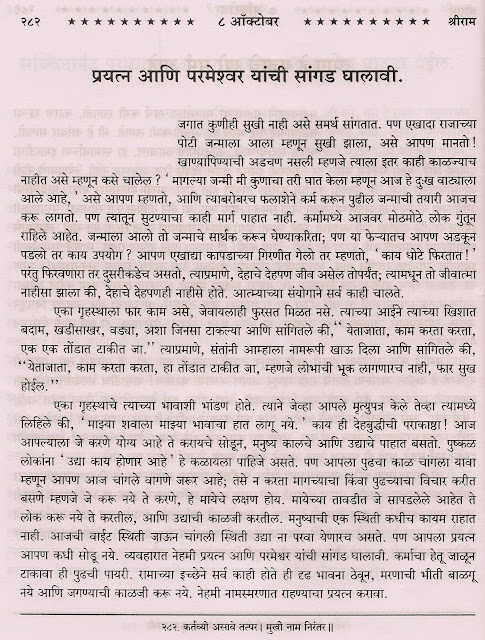 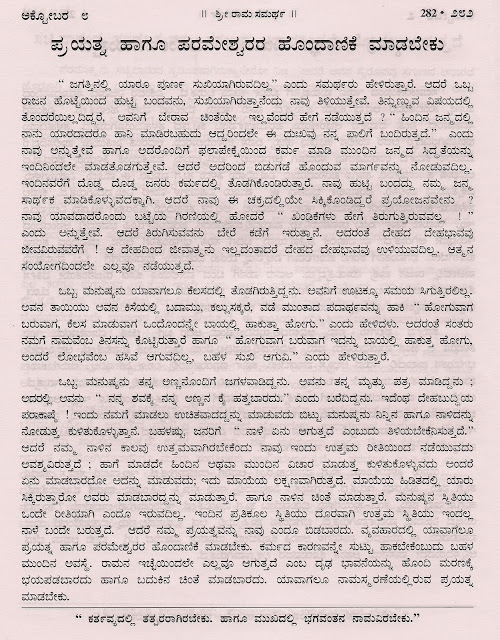