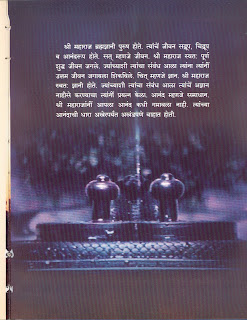 The Royal Road of Devotion to God
Knowing God is alone true knowledge; what commonly goes by the name is merely verbosity, pseudo-knowledge, which cannot lead one to knowing about the Prime Mover. Devotion alone takes one to true knowledge. A devotee is one who is never apart from God. Non-attachment to worldly pleasures and objects cannot be secured by merely regimenting or chastising the body; it is automatically inculcated by willing acceptance of the situation in which God chooses to keep us. If He chooses to keep us in pleasant circumstances, we should take care to see that we do not contract an attachment. Vairagya does not require us to quit prapancha. Saints did not forsake their prapancha; in fact, they pursued it with an unerring sense of duty, a shade better than us, but without attachment to it in the heart. Indeed, vairagya can be said to be truly imbibed only by the unattached. It need not be advertised by smearing the body with ashes, but may be known by the degree of contentment at God's dispensation. To respect, to accept, a situation without entertaining any expectation, but with humble contentment, is abiding by divine will, or becoming a devotee. Nama-smarana facilitates this attitude; so put your faith in it and practise it assiduously.
The nama which the guru has imparted should be practised, and in fact, the guru should be seen as identical with it. Thereby the disciple comes to see the guru in everything, everywhere; even in a bad place no less than in a nice hall. Then, as everything looks like the guru, there remains nothing that is bad, detestable.
Nama-smarana is not only a means, but also the object. Believe in nothing that contradicts this, for it is the only truth. Believe firmly, unshakably, in it. If you have this belief, God is not far to seek; He is ever by you.
Paramartha is not at all difficult if you transfer to it the attraction and the attachment that you have today for prapancha. To go to the guru in utter surrender is the same as surrendering your ego; the former is not possible without the latter. So long as I identify myself with the body, so long only one suffers the pangs of pain and misery. Ego is destroyed by nama-smarana, so keep yourself constantly absorbed in it. 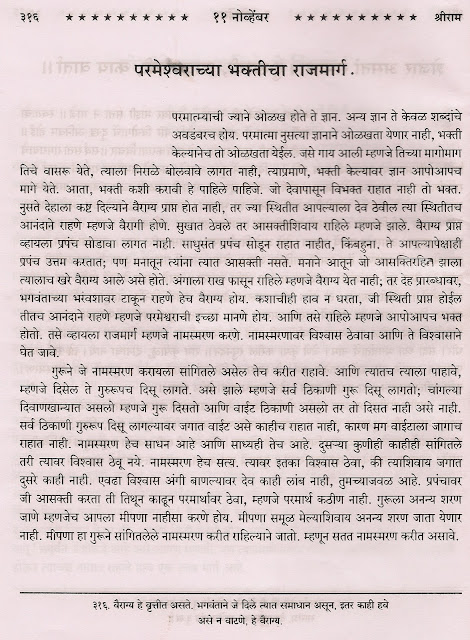 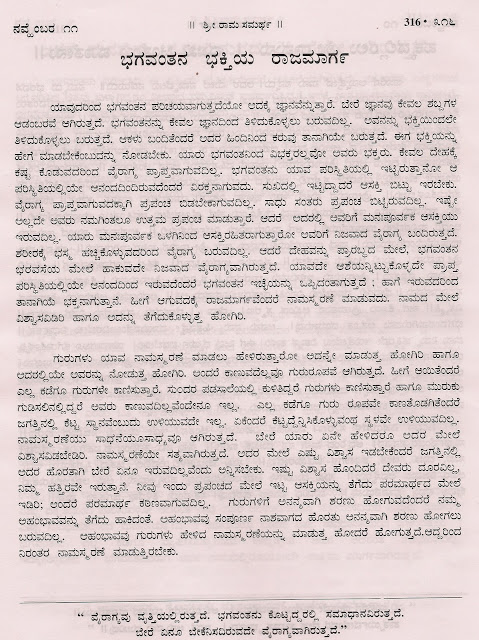