Worry Arises out of Doership
Does one have to go and search for joy? No. Here, one who is Himself the fountainhead of joy has played into the hands of the delusion that he is subject to misery. A certain man looked into a mirror to see his face, but could not do so. A wise man who was beside him said, "Pass the mirror to me"; he dusted its surface, and the man could then clearly see his reflection. This is precisely what the saints do. They remind us that we are ourselves the Ultimate Reality, the source of imperishable joy. The trouble is that we assume proprietorship of prapancha, and thus become subject to pleasure and pain, forgetting that the One who created also looks after its ups and downs. By what right can we claim proprietorship, doership? God, after all, manages everything according to His will and plan, while unnecessarily, futilely, we fret and fume. The best course for us is that we should leave Him to do as He pleases, and give up all worry. Once we leave everything and ourselves to His care and pleasure, we free ourselves from worry, and what remains is pure, unperturbable bliss for us.
Worry is a curious thing ! A man was worried that his son could not get a suitable job. When later, he succeeded, the man started worrying to secure a proper bride for him; then, after the wedding, the old man found that her conduct departed from expectation, which worried him. Thereafter, want of issue to the girl provided cause for worry. After the girl did deliver a son, the baby started having spasms. The trouble, which again provided a source of worry, yielded to long medical treatment. But, finally, life-long worry gave the old man apoplexy, to which he eventually succumbed !
It is clear that all worry originates in the sense of doership and proprietorship, which themselves stem from forgetting God. We take it that feeling anxious about anything is but 'natural'; this idea itself is pernicious, and must be eradicated. It is not the idea that is chaining us down; on the contrary, it is we that hold on to it and won't let it go. We should remember that one who makes God his sole support, has never reason to worry. He is convinced that God does everything for him, even if it is apparently calamitous. 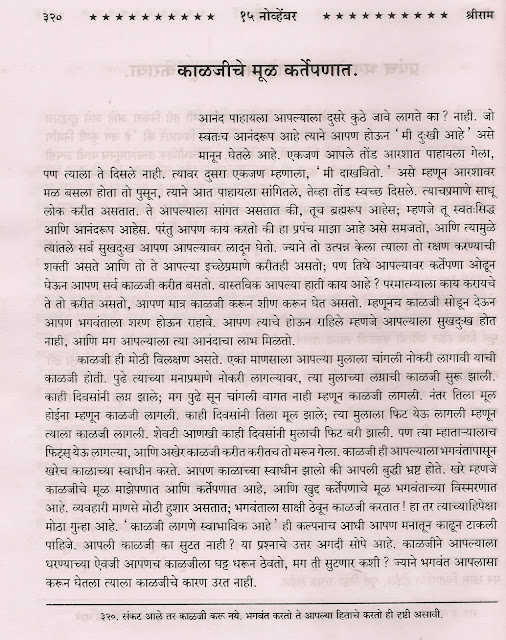 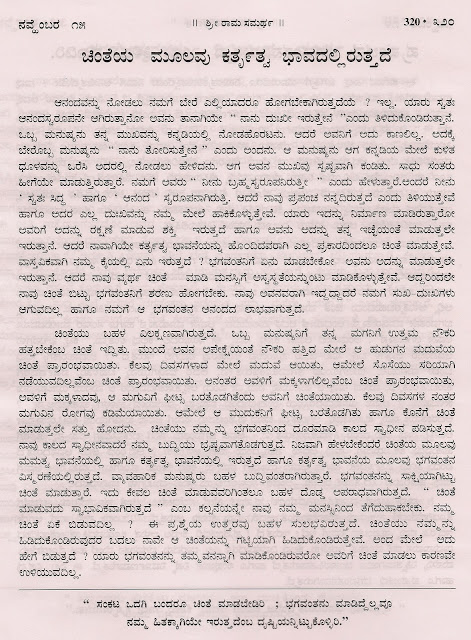