Divine Grace is Essential for Eradicating Conceit
To those who have come to Gondavale and are planning to return to their respective places, I would address a special word. Tradition expects a pilgrim to give up some of his defects at a holy place. Here, in Gondavale, you have been face to face with God, so I expect you to do something special. Leave a defect, conceit, here, and take God's grace with you in return. Now, conceit is not a material thing that could be handed by one person to another. It can, in fact, only be given up if God grants His grace, not otherwise.
Once it so happened that a sadhaka was performing some sadhana for three years. Gradually, as the sadhana advanced, there also grew in him conceit about his performance. His guru, as he happened to pass by, sensed this, approached him, and asked, 'What are you doing here?' The sadhaka, with conceit lurking in the heart, replied, 'I am performing this sadhana for close on three years.' The guru, divining his bloated conceit, only said, 'Very good; now carryon for only three days, and you will have achieved your goal.'
The sadhaka felt very happy at these encouraging words, and enthusiastically and with reinforced conceit, recommenced the sadhana, thinking lightly of mere three days. Curiously, though, he found himself unable to concentrate his mind even for three minutes. He felt pins and needles in the limbs, vague fear around him, a sensation of being thrown out of the body, and such other nondescript sensations, making concentration impossible.
Then it dawned on the sadhaka that all this while, he could go through sadhana by his guru's grace, and that the conceit that he had himself been doing it was entirely unjustified. He then went in surrender in complete humility to his guru, who then blessed his effort.
We should therefore realize that conceit, even for a good cause is harmful; indeed, conceit for a good deed is more subtle, more difficult to eradicate. Conceit for prapancha is, if at all, preferable, for it is more obvious, and therefore more likely to be detected.
In paramartha, it is easier to achieve than to consolidate what is gained. Let us pray to God and persevere in nama- smarana; He will then Himself assist in giving us joy in it.
* * * * *
Posted by Raghunath at 6:02 AM No comments: 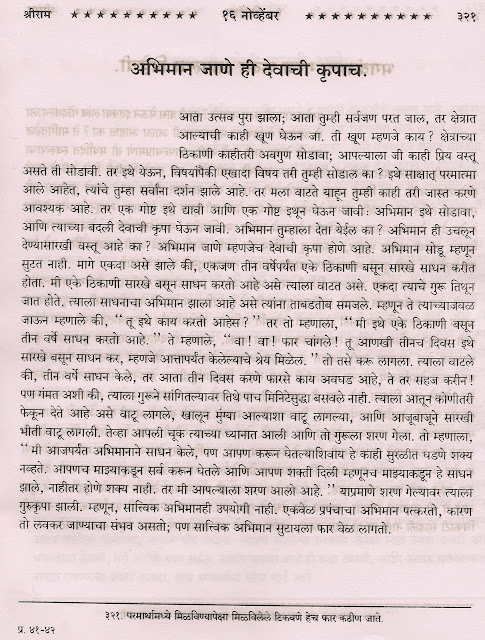 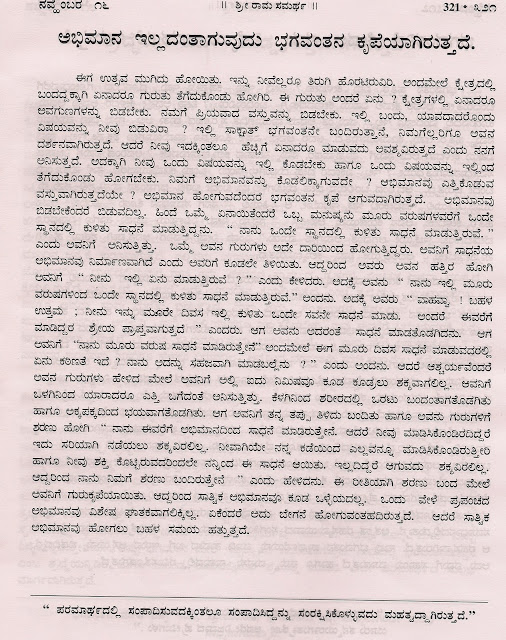