Purify Yourself Inwardly to See God.
If we investigate the root cause for birth, it can be traced to desire of one kind or another. We thus find ourselves trapped by desire in the maelstrom of birth and death. It is futile to seek arguments and try to probe whether desire came first or birth. It is like posing the question, which preceded, the tree or its seed. Whatever that may be, the fact remains that the cycle of birth and death goes on. We should, in brief, free ourselves of worldly desire.
When we see a shadow pass across, we conclude that someone has passed. The world is like a shadow, the basic fact being God. Let us try to recognize Him. Although He is all-pervading, we cannot see Him because our eye-sight is clouded by worldliness. We can only see Him when our eyesight, that is, our outlook, is cleansed of that worldliness. If, for instance, one looks on a woman, she will be seen as one's impulse may be; to a lustful man she will appear amorous, while a noble man will feel motherly regard for her. So, without a pure, selfless heart one will not notice the immanence of God in everything. While trying to perceive God everywhere, one should not overlook His presence in one's own self. Both kinds of awareness have to be practised simultaneously.
Obey the sadguru; this destroys ego. Saints somewhat deprecate rigid conformity to religious practices, for the possibility of a rise of self-righteousness; whereas, doing what the sadguru advises precludes that possibility. An objection may be raised here that the sadguru, too, advises nama-smarana, that is, some kind of action. A man suffering due to overeating went to a physician to seek relief. He was given three powders to be taken at stated intervals. 'But, doctor,' he protested,' on the one hand you advise me not to eat anything, and, in the same breath, you ask me to take these powders! How can we reconcile your instructions?' The doctor replied, 'These powders have to be taken to counteract the effect of previous overeating.' Similarly, the action of nama-smarana is advised for removing the effect of previous actions, which tended to create the rise of the sense of ego and doership. The sadguru reduces our love for sense-pleasures and creates relish for nama. 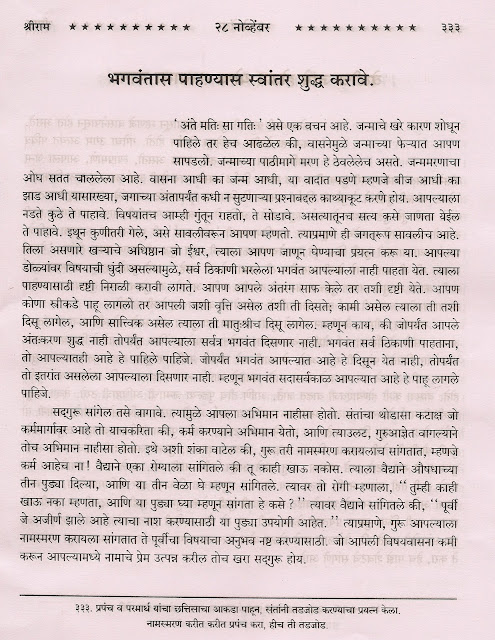 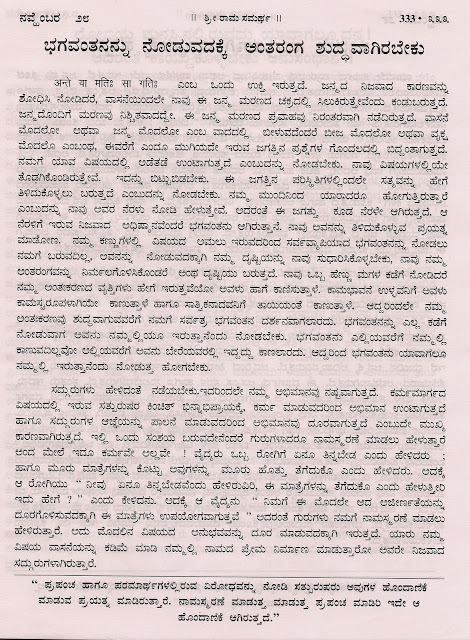