Living in Nama Gives True Vision of God
Even Lord Shreekrishna had to discard His mortal body. The Cosmic Soul, too, when it appears in a material form, must follow the laws that govern the material world. When appearing as a perceivable entity, a form, attributes, and all other auxiliaries come unavoidably. We, being in the human form, would naturally like to see Him in a similar form, but we should remember that, that was only a role that He then played.
The darshana in a physical form is forgettable, perishable. The darshan that is obtained by a person engaged in ceaseless nama-smarana is not only the true one but one that becomes clearer, brighter, every day. So keep on chanting nama, and you will always have darshan of God. A saguna form cannot last for all time, but nama is the complete symbol of the Ultimate Reality, the true God. Uttering nama is equivalent to having God by one's side. God in the saguna form is affected by certain limitations. Rama and Krishna in their human form could not change the evil mentalities of Ravana and Duryodhana. The saguna manifestation cannot achieve the task of transforming the mentality; it can only be accomplished by nama. In the practical world also we find that the form changes and perishes, but nama abides. Even Rama and Krishna disappeared in form but their names have lived down the ages. In the present degenerate age there is no visible incarnation, but nama is the incarnation, and it is the true saviour.
Lord Shreekrishna, had educated Uddhava, His bosom friend and staunch devotee, about the true nature of the Ultimate Reality. He requested him to go to village Gokula, the scene of His childhood, to pacify the rustic milkmaids, who were apparently pining for Him. Uddhava complied. He explained to the maids that Shreekrishna was not just the infant and the child that had fascinated them, but the very Cosmic Soul; that it was ignorant to pine for the apparent child. The maids burst out laughing, saying, "Shreekrishna has duped you. Actually, we don't miss Him, for He is held captive in our loving hearts." Let us emulate them by love and utter surrender. 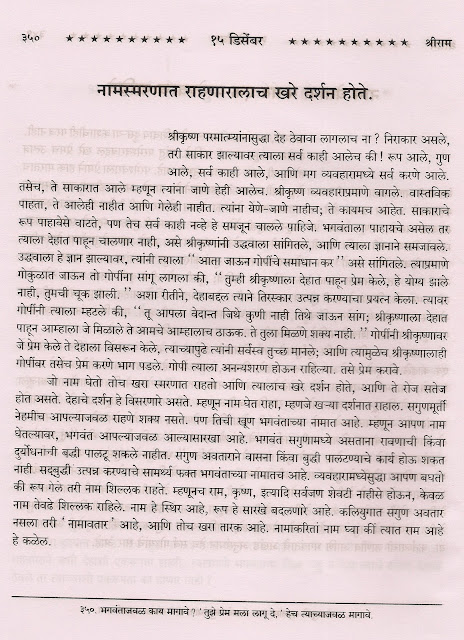 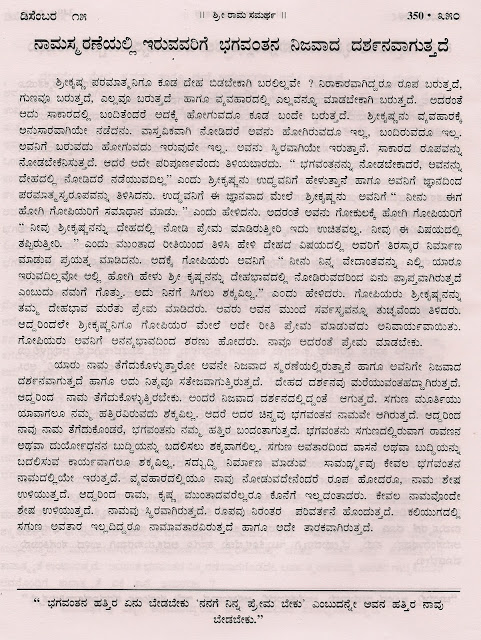