Nama is Synonymous with God
Nama is the name of God. Considered as a means of attaining God, there is no distinction among the different appellations by which different people may be calling God. Nama is the connecting link between an individual soul and the Cosmic Soul. It is the means as well as the end. It has its beginning in saguna and it ends in nirguna. God, the Ultimate Reality, is abstract, attributeless, formless, intangible. He first got His nama only when He manifested in a tangible form; so nama is saguna. Nama persists even after the tangible form ceases to exist; so it can be termed nirguna. So, whether one worships a tangible representation or an attributeless, abstract concept as God, nama is the common foundation.
Nama is extremely fine, subtle, and so is vritti; nama is , therefore, the connecting link between vritti and God. Repeating nama will cleanse and purify vritti; thereby the mind will be clarified, peaceful, stable, free from all agitation, and this will eventually strengthen faith. In olden times, a bride was initially a complete stranger to the bridegroom's family; and yet she completely merged her personality, her individuality, with her husband's. Vritti should similarly merge and lose itself in nama.
Food has some taste of its own; adding our relish to its taste, we eat the food. Nama, without a taste of its own, will gain sweetness in proportion to our relish for it. Roads converge on Pandharpur from different directions. However, for darshana all have to join the common queue. Similarly, whatever their sadhana, all must finally take recourse to nama. The bliss that nama is can be realized by uttering nama, listening to it with one's ears, and forgetting one's self in the process.
We completely identify ourselves with our name; so is God completely identified with nama. The nama that we chant today continues unchanged, but it becomes increasingly comprehensive and meaningful; finally one experiences its identity with God. Water is an essential component of the living body; so should nama become an integral part of ourselves. It should so thoroughly pervade our being that it should only cease with the last breath. Nama should become such an integral part of our life that nama and life cease together. An adherent to nama will realize that it is nothing but sheer bliss.
* * * * *
Posted by Raghunath at 6:02 AM 1 comment: 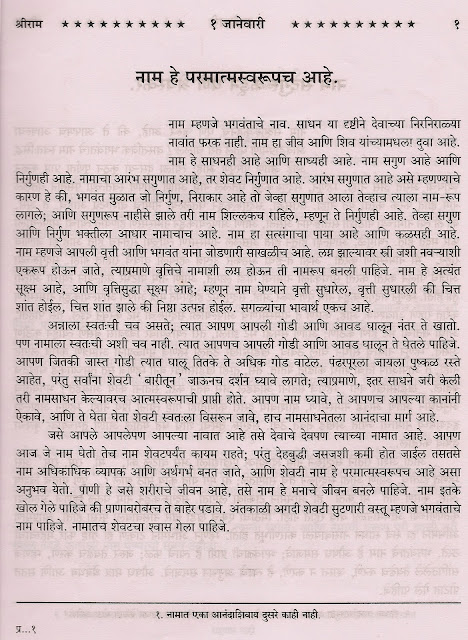 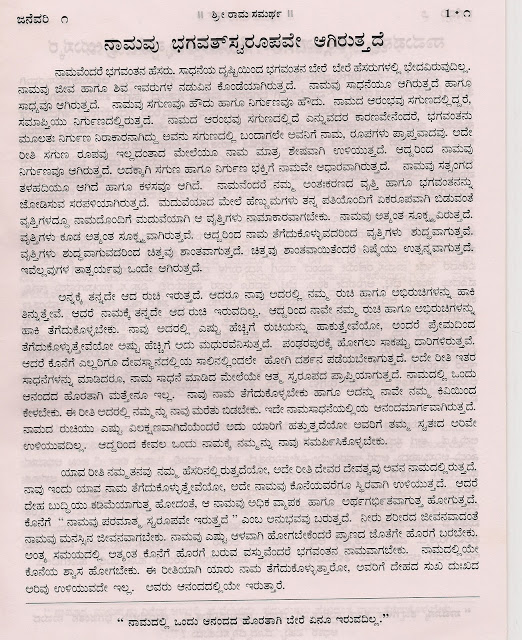