Complete self-surrender is the only means for God-realization; such self-surrender is best achieved by nama-smarana, or constant remembrance of nama. Remembrance and forgetting are both properties of the mind, not of the body; besides, they are both involuntary. They are both devoid of "doership" or ego, since there is no bodily action involved. Nama-smarana is, in this sense not 'done', it 'gets done' by the grace of God or the guru. Consequently, nama-smarana is most effective in surrendering oneself to God.
Self-surrender has another sense, namely, to stop activity of one's own volition in respect of action, speech, and thought. This, however, is not easy. Slow cycling for instance, is more difficult than normal or fast cycling. Desisting from doing a thing may often be more difficult than doing it. Self-surrender to the sadguru means effacement of ego, that is, of the pride of doership. Nama-smarana done at the behest of the sadguru eliminates the sense that '1 am doing it'. Indeed, it is the sadguru who is prompting me in it, and therefore He is the doer, not I. Nama-smarana is the means par excellence for achieving thorough self-surrender.
In the Bhagavadgita, the Lord asks Arjuna, "Simply surrender yourself to Me". Now such surrender is not possible without first eliminating body­consciousness. Attachment for worldly grandeur, and realization of God, do not go well together. It was therefore that Shrikrishna directed Uddhava to retire into solitude and meditate on nama if he was really keen to attain Him. This means that God is not attainable unless one turns one's back on the world and its lures.
The laws for attaining to God differ from those applying to the acquisition of worldly things. To do the necessary bodily acts and to dispose material things accordingly, to satisfy a desire arising in the mind, is the worldly way; it calls for translating an abstract idea into concrete act. With God, the situation is the reverse. Because the Supreme Being is extremely subtle, to attain to It is going from the concrete to the abstract. The instrument to achieve this must, therefore, be one that takes the concrete to the abstract. Nama, being physical on the one hand, and close to the subtle on the other, is the one such instrument.
* * * * *
Posted by Raghunath at 6:02 AM No comments: 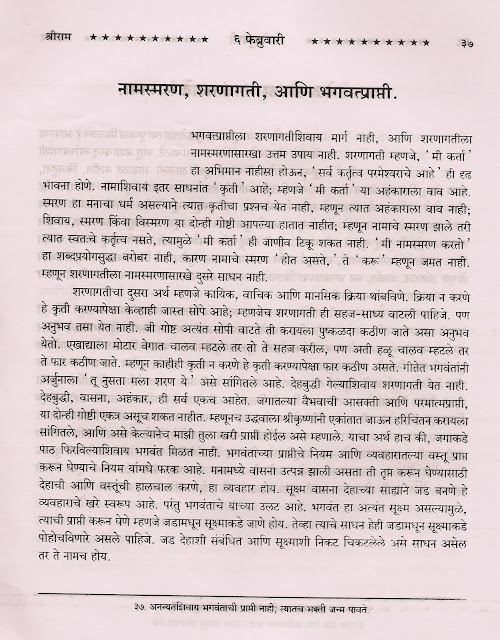 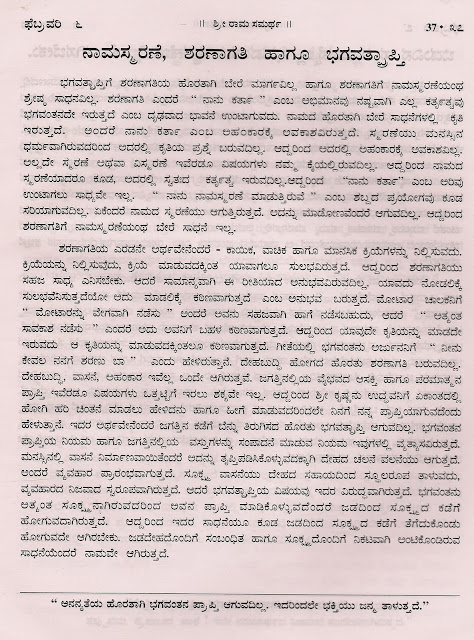