Posted by Raghunath at 6:30 PM No comments: 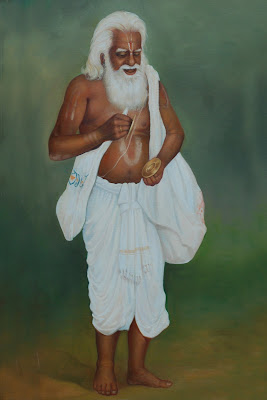 The Divine Grace
Poojya Bhaktha Sri Ramasheshaiah’s Birth-date happens to be 30-3-1909. As per Hindu calendar, it is on Sri Rama Navami day
on which Sri Ramaseshaiah’s birth day is usually celebrated.
So, on this day, let us pay our humble tributes to him by reading a little about his life:
It was Sri Maharaj’s Grace that befell on Sri Ramasheshaiah when he first met Sri G. Venkannaiah. Sri Ramasheshaiah was a civil contractor doing P.W.D. works and Sri Venkannaiah visited his place as a P.W.D. Sub-Overseer. The meeting turned out to be a turning point in the life of Sri Ramasheshaiah. It also dawned an era of a life-long devotion, friendship and dedication. Ramasheshaiah who was a materialistic person active in accumulating wealth, dedicated himself to the cause of the Mandir. He became a staunch devotee of Sri Maharaj and Sri Ram,
Sri Ramasheshaiah shifted his residence to Chintamani in order to be near the Mandir. He built a house for that purpose.
When Tatya Saheb Ketkar Maharaj visited Chintamani during 1945, he had a chance to serve him by massaging and giving him an oil bath during which, it seems, that too many emotions he had hither to, began to cool down. Later, Sri Ketkar Maharaj visited his house and gave a discourse, during which Sri Ramasheshaiah expressed his worry for not having a son. By Sri Maharaj’s Grace, a son was born to him and was named Brahmachaithanya Prasad (B.C. Prasad). For the maintenance of the Mandir and to do annadaan, Sri Maharaj suggested Ramadasi Bhiksha. Sri Venkannaiah, who knew of Sri Ramasheshaiah’s capacity, asked him to undertake this service.
Sri Ramasheshaiah was a person of strong will and determination. He took up this service with a single-minded devotion. On every Thursday, his bhajan of ‘Raghu Pathi Raghava Raja Ram, Pathitha Pavana Seetha Ram’ started at 7 a.m. He carried a big Ramadasi bag on his shoulders, and went round the town. He returned to the Mandir after 2 p.m. when he would stop chanting the Bhajan. The rice and coins thus collected were deposited in the Mandir for its use. He did this irrespective of the weather; the scorching Sun or the pouring Rain. Up-to his 85th year, every Thursday was a day of penance to him. Whatever personal work he had, was shoved aside. He had lands in his village. Bettahalli, about 30 miles from Chintamani. After attending to his works there, at any cost, he used to be at the Mandir on Thursday morning, for the Ramadasi Bhiksha.
He left his mortal coil on 24th June 1996, at the age of 87, having a son and a daughter, and many grand children.
His service to the Mandir is unique, and his chanting of Rama Bhajan is still lingering in our ears.
Posted by Raghunath at 9:25 PM 1 comment:

An important guest to Chintamani Mandir 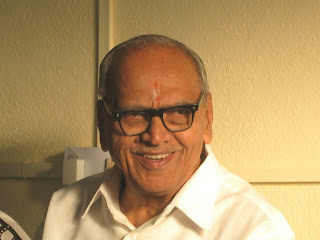 An important guest to the Mandir

Sri Damleji (Bapu Kaka), Chief Trustee of Sri Brahma chaithanya Mandir of Gondavale, visited the Chintamani mandir on 20-3-09, with 3 other devotees from Pune.
Posted by Raghunath at 9:49 PM No comments: